Digging Up the Past: Part II • MWC 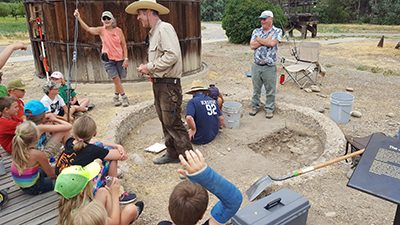 When last we spoke, CMU’s archaeological field school finished their initial exploration of the mysterious building on the western side of Cross Orchards. After a brief reprieve from the site to perform archaeological tests elsewhere in western Colorado, the students were back and ready to fulfill the second half of their mission: the foundation of the old silo.

The silo was potentially an untapped treasure trove of historic artifacts. This area was previously recommended for further study during the CAS excavation of 1983. Plus, notes from an oral history suggested that the foundation was filled in with six to eight feet of dirt after the silo came down in the 1970s. That data could suggest the presence of a formerly unknown refuse pit. Needless to say anticipation was high. 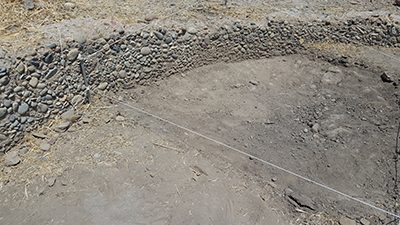 On the first day back to Cross Orchards the students were energized and ready to begin their work. The approach was simple: create two test pits on the eastern side of the old silo’s interior foundation and dig down as far as possible in the time that was available. Sediment was being removed layer by layer, exposing the hundred-year-old foundation centimeters at a time. Soon artifacts were beginning to emerge from the ground. Some of the objects the students recovered included fragments of broken window glass and an old hand-forged door hinge. Things were looking promising.

Unfortunately, excitement quickly dissipated. The further and further in depth the field school dug, the less and less artifacts were found. Historic objects quickly gave way to incredible amounts of small and medium-sized river cobbles. In fact, when these river rocks were removed two or three more were resting just below. It was very frustrating. 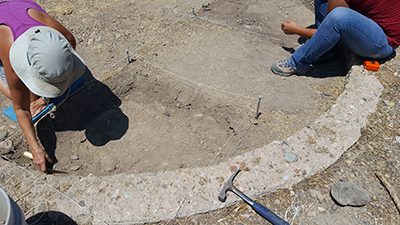 So was all the methodical scraping, digging, and measuring these students performed over the course of the week ultimately worth it? Absolutely! Not only did they receive priceless real world archaeological experience, the museum also gained a solid working hypothesis concerning what may have lead up to the original silo’s demise. Once verified this new data will be incorporated into the overall interpretation of the site.

Looking ahead, CMU will return in the summer of 2017 to continue archaeological exploration in key areas of Cross Orchards. We will keep you updated as new information becomes available.