Hero Rick Arrives Just in Time to Save the Day! • MWC

It’s the end of dig season at Dinosaur Journey. We’ve taken down the tents, tarps, and tables, put away all the tools and shovels… but we had two more big jackets to bring into the museum. Usually, this is no problem. We have a very nice flatbed trailer (the decking was rebuilt this summer by volunteer Gary Verdick); we have great trucks to haul loads; and we have a crane hoist mounted on the trail that can pick up most anything we dig up. Occasionally though… we have some BIG items to remove from the quarry. Remember the giant femur from 2014? City of Fruita lent us a backhoe to hoist that beast. This year, the two field jackets (burlap and plaster wrapped packages of rock and fossils) left were very large. We hoisted the first (the smaller of the two) onto the trailer early Friday morning, no problem. But the second one… it was not budging. It was too heavy, and we were out of time. Dig season was over, we were taking everything down and back to the museum… we had to get it out. We sat and pondered the fate of this huge jacket for several minutes before the crew realized there was no way around it. We needed a stronger hoist. We needed help. 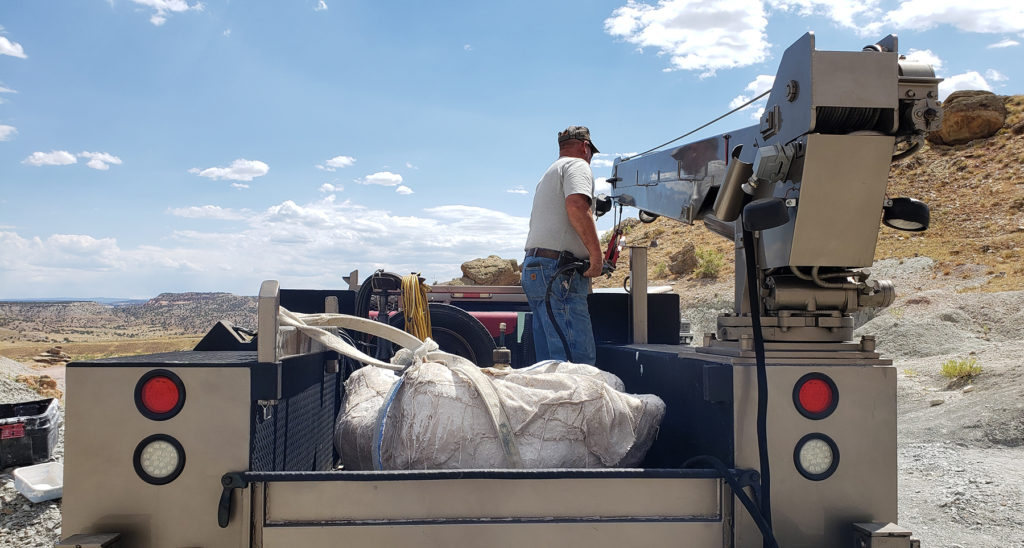 There is no cell phone service at the Rabbit Valley Quarry, so we decided to bring the crew back into town with the smaller jacket and call a friend of the museum, Rick Charlesworth to see if he could lend us a hand. Our spirits were pretty low, we had such hopes to get both jackets brought back to DJ that day, and we had no idea if Rick was even around and had time to help us. But our spirits were not low for long. Head of Maintenance Cecil Wilkinson came into the paleo lab as we finished unloading the first jacket. Rick was available … that day! We cheered and drew a huge sigh of relief. Meeting us back at the quarry, just a few hours later, we watched spellbound as the hoist on his welding truck lifted the huge package of fossil bone and rock from the quarry pit, high in the air before placing it gently into the bed of the truck. Our curator of paleontology, Julia McHugh, and our Field Coordinator, Casey Dooms, held their breath as it lifted up higher and higher. Was this really happening? Were we going to get the field jacket back to the museum? Yes. Rick and his wife came to our aid and with almost no effort pulled our burden off the ground and returned it to the museum. We are very thankful to have such a friend as Rick. He was truly the Hero of the Day!