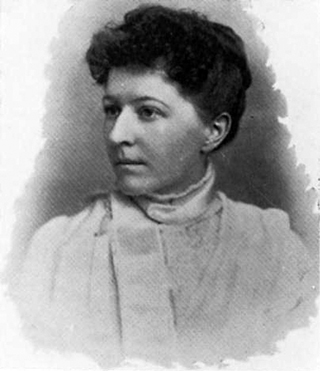 Imagine a petite young woman, spirited, vivacious, with a brilliant mind and quick grasp of fundamentals – and you will see Ellis Meredith as described by her peers and opponents. Her organizing abilities and powers of persuasion were instrumental in Colorado women obtaining the vote in 1893, making it the first state in which men voted for woman suffrage.

As a journalist, Ellis Meredith advocated for woman suffrage and temperance in her daily column, “Woman’s World” in the Rocky Mountain News. She was the link to national suffrage leaders, who sent Carrie Chapman Catt to travel Colorado and speak to male voters wherever they were.

Ellis agreed with the respectable tactics of the NAWSA and winning suffrage state-by-state, aligning them with President Wilson. NAWSA members publicly denounced the militant National Women’s Party (NWP), led by Alice Paul, and the two organizations split. In her Denver Post articles, Ellis expressed disdain about their picketing the White House and President Wilson.

Mrs. Catt urged NAWSA members to do ‘war work’ to emphasize doing their patriotic duty. For the first time, it was acceptable for women, even married women, to work outside the home as they replaced men in jobs in industry and manufacturing needed for the war. With the men gone, Ellis realized that now many women were the primary wage earners, in addition to caring for the home and children. Women were expected to relinquish the jobs once the war was over; however, many were widowed or had disabled husbands and still needed the work to support their families.

Acknowledging the women’s war work, President Wilson came out in support of a federal amendment in his last 2 years. Ellis worked many hours, early and late, with undecided congress members to obtain their vote, yet southern senators, loyal to special interests, defeated it twice more.

Both suffrage organizations, though divided by tactics, worked to obtain more Senate votes, NAWSA by gaining more suffrage states, such as New York, which Ellis attributed to the women’s ‘reasonable’ methods in her Denver Post article. The NWP successfully campaigned for the election of two more pro-suffrage senators.

Suffragists rejoiced when the woman suffrage amendment passed the House and Senate (by 2 votes) in June in 1919. It took 14 months for the required 36 states to ratify it. Finally, the 19th Amendment was added to the US Constitution on August 26, 1920.

After the suffrage victory, Carrie Chapman Catt transformed the NAWSA into the League of Women Voters.

The birth of the working woman outside the home during WWI and getting the vote shortly thereafter, changed lifestyles of women, broadened expectations of society, and transformed the political landscape of our country forever. 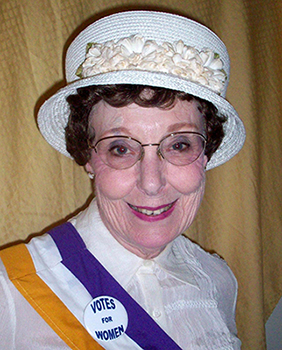 Women’s history has long been Kathy’s passion, even before retiring from 35 years as a Speech/Language Pathologist. Discovery of two file boxes in the Ellis Meredith Collection #427 at History Colorado revealed actual letters from eastern suffragists and much original material from the Colorado and national suffrage campaigns as experienced by Ellis Meredith, journalist for the Rocky Mountain News and later the Denver Post. Kathy joined The Legendary Ladies, Inc. to make this fascinating character come alive! Kathy also portrays Dr. Florence Sabin, medical researcher, who represents the state of Colorado in the US Capitol.

1865:     Born in Montana to Frederick and Emily R. Meredith, a college-educated suffragist; later moved to Denver

1904:     Ellis Meredith and Colorado women to testify before the US Judiciary Committee in Washington DC on the positive results of women voting

-Ellis moves to Washington DC in January; works at Women’s Bureau and for suffrage; sends articles to the Denver Post