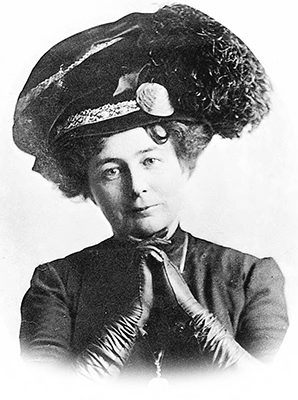 Emily Griffith, pioneer educator, believed everyone deserved an education regardless of age, race, gender, or background. Education was the way out of poverty. She dreamed of a school, supported by the Denver Board of Education, where children and adults could come to learn during the day or night. In 1916, her dream came true. She named it, The Opportunity School.

Emily heard how some citizens feared the new immigrants who flooded into the U.S., including Denver. Many thought the immigrants were too different–strange language and customs, grabbing jobs and housing that should go to the returning soldiers of the Great War. But Emily did not see the immigrants as a threat. She welcomed them to learn at the Opportunity School. Devoted to her students, she brought soup for the hungry, and coins for their transportation on streetcars.

Emily held many state positions, retiring after a monumental career, then dying mysteriously. 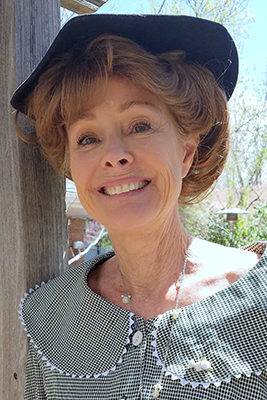 Linda Gleichmann has been performing for The Legendary Ladies, Inc. since 2001. In addition to Emily Griffith, some of her other characters include, Susan Shelby Magoffin (first white woman on the Santa Fe Trail), Amelia Earhart, and Annie Oakley. Linda recently retired from teaching and loves to substitute. She now has more time to bring history alive by performing her characters for the students at her school and around Colorado.

1884:   Emily graduates from the eighth grade, the highest level of education she will ever complete; Emily’s family moves to Nebraska and Emily begins teaching in a sod schoolhouse

1896:   Emily earns full teaching status and is hired as a teacher at Central School

1916:   On September 9, the Opportunity School opens and Emily is appointed principal

1920:   Emily is named the first honorary female member of the Kiwanis Club of Denver

1922:   Emily is named president of the Colorado Education Association

1926:   New building was completed at 12th and Welton Streets

1933:   Emily retires as principal of the Opportunity School

1933 – 1945: Emily serves twelve years on the State Board of Vocational Education

1947:   Emily and her sister, Florence, are found murdered in her mountain cabin in Pinecliffe

1976:   A stained glass portrait of Emily Griffith is dedicated in the Colorado State Capitol building

1985:   Emily Griffith is inducted into the Colorado Women’s Hall of Fame