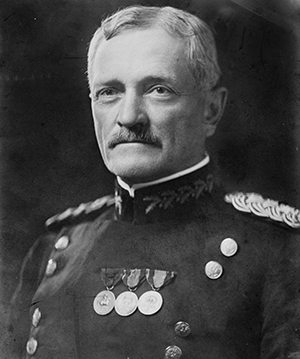 It seemed that Jack Pershing was doomed to be late for everything. Born in Missouri in 1860, he came along too late to fight in the Civil War. Posted to New Mexico territory after graduating from West Point, he arrived a month after Geronimo’s surrender. Ordered to the Dakotas in 1890, he just missed the terrible Wounded Knee massacre. When the Spanish-American War broke out in 1898, he had hardly fired a shot in combat. But he had demonstrated uncommon leadership skills by organizing and drilling the award-winning Pershing Rifles at the University of Nebraska. He had also commanded a troop of Sioux Scouts and a unit of 10th Cavalry African-American soldiers, for which he had won the nickname “Black Jack.”

Black Jack Pershing led the same 10th Cavalry troops in Cuba. They fought gallantly in the Battle of Kettle Hill and San Juan Heights, only to watch Teddy Roosevelt and the Rough Riders claim all the glory. Not until four years later did he win fame as the great Moro fighter who pacified Philippine Muslims in the Philippine-American War. The next year this dashing bachelor met Helen Frances Warren (Frankie), daughter of Wyoming Senator Francis Warren, Chair of the Senate Military Affairs Committee. Thanks to his distinguished record, and also to President Roosevelt’s strong recommendation and Senator Warren’s not insignificant endorsement, he gained promotion from Captain to Brigadier General in 1906, jumping over 862 higher ranked officers in the process.

There followed two more tours in the Philippines, the last as military Governor of Moro Province. Not long after his return to the U.S., terrible tragedy befell his family when in 1915 Frankie and their three young daughters died in a house fire in San Francisco. Only son Warren survived, and the tragedy haunted Pershing for the rest of his life. 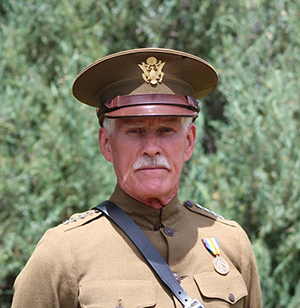 After burying Frankie and his daughters in Cheyenne, Jack accepted command of America’s punitive expedition against the elusive Pancho Villa in northern Mexico. Although the expedition met with mixed results, Pershing proved himself to be a tough, decisive and relentless military leader. When the United States entered World War I in 1917, President Wilson appointed him Commander of the American Expeditionary Forces in France. Elements of that great army of over 2,000,000 men fought at Cantigny, Chateau-Thierry and Belleau Wood, at St. Mihiel and finally in the greatest battle of American military history, the Meuse-Argonne Offensive. Pershing returned home at war’s end as a national hero.

Like Generals Washington, Jackson, Taylor, and Grant before him, General Pershing seemed primed to become President of the United States. But politics and Pershing did not mix. He couldn’t even beat Warren Harding for the Republican Party’s nomination in 1920. Instead, he served as Chief of Staff from 1921 to 1924. More than any other man, he modeled what it meant to be a modern American military officer. Upon retirement, he wrote extensively. He was still editing his memoirs when he died on July 15, 1948. 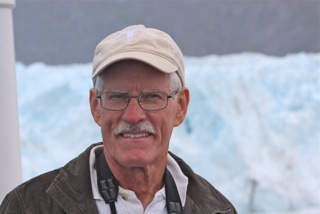 In 1973 Ron Edgerton arrived in Greeley with his family (Becky, Kate, and Jeremy) as a young Professor of Asian History at UNC. He had become interested in Asia as a Peace Corps Volunteer in the Philippines. Between 1985 and 2000 he directed UNC’s Honors Program while also teaching courses in Asian History and the Life of the Mind Program. After Becky’s death, he met and happily married Thelma Bear Edgerton. He and Thelma have been Chautauqua volunteers for many years. Ron has written a book, due for publication in 2018, entitled, General & Datu: Black Jack Pershing and Counterinsurgency Warfare in the Muslim Philippines, 1899-1913.