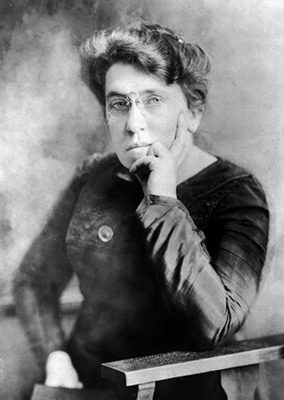 Emma Goldman was an anarchist known for political activism, writing, and public speaking. After emigrating from Lithuania to the US in 1885, she played a pivotal role in the development of radical politics and feminism in America. Her lectures attracted thousands. Goldman was imprisoned several times for inciting workers and illegally distributing birth control information. She believed that birth control was every woman’s right. In 1892, strikers at Carnegie Steel, managed by Henry Frick, were killed by Pinkerton guards. Goldman’s long-term companion Alexander Berkman wounded Frick in an anarchist “attentat,” or call for justice, and was incarcerated. Goldman was accused of conspiring with him, and in 1901 was blamed for inspiring the assassination of President McKinley. Neither accusation was proven, but Theodore Roosevelt called her “the most dangerous woman in America.”

When the United States prepared to enter the European War, Goldman and Berkman, then out of jail, organized a No-Conscription League. They believed that the state fought wars on behalf of capitalists; they viewed the draft as one of the worst forms of state coercion. The League became a vanguard for anti-draft activism, with chapters in numerous cities. In 1917, Goldman and Berkman were arrested. During their trial, Goldman invoked the First Amendment, asking how the government could claim to fight for democracy abroad while suppressing free speech at home: “We say that if America has entered the war to make the world safe for democracy, she must first make democracy safe in America. How else is the world to take America seriously, when democracy at home is daily being outraged, free speech suppressed, peaceable assemblies broken up by overbearing and brutal gangsters in uniform; when free press is curtailed and every independent opinion gagged? Verily, poor as we are in democracy, how can we give of it to the world?” An additional argument was that members of the clergy were admired for following their consciences; why couldn’t other citizens do the same? Nevertheless, Goldman was sentenced to two years in jail for conspiring with Berkman to “induce persons not to register” for the newly instated draft. 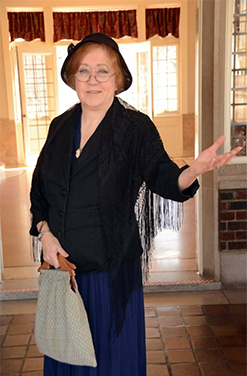 Released in September, 1919, they were re-arrested, and with hundreds of others deported to Russia during America’s Red Scare of 1919-20. Initially supportive of the Bolshevik revolution, Goldman reversed her opinion when Lenin said: “There can be no free speech in a revolutionary period.” Goldman’s experiences Soviet Russia led to her book, My Disillusionment in Russia (1923); however, she was never allowed to return to the US except for a brief tour in 1934 to promote her autobiography, Living My Life (1931). Goldman spent her later years in Toronto, supporting Sacco and Vanzetti, Spanish anarchists, and other radical causes. She made lasting contributions to progressive politics through her birth control and free speech movement activities. The latter inspired the formation of the American Civil Liberties Union (ACLU). In recent years, feminists have rediscovered Emma Goldman as an early fighter for women’s freedom, gay rights, and individual liberties for all. 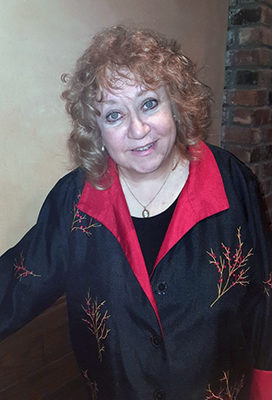 When not performing, Dr. Drucker is a professor in the Dept of English at Nassau Community College in Garden City, NY, where she also teaches Women’s Studies courses. She states that “all teachers have to be performers, they just don’t usually get to wear period costumes.” She lives in New York City, where she received a Queens Council on the Arts grant to teach others how to re-create figures from history.