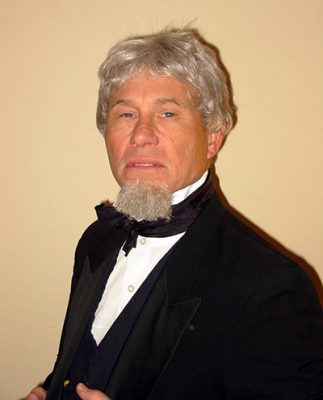 Portrayed by Doug A. Mishler

Vilified in the south for decades as a coward and tyrant who lost the war for General Lee; damned for a century as the quintessential evil slave owner and one of America’s great traitors, Jefferson Davis is a character who has always generated more passion than insight. While a simple man in many ways, Davis was also remarkable. Davis graduated from West Point, fought in the Mexican American War, was Franklin Pierce’s Secretary of War, initiated the transcontinental railroad, and supported Manifest Destiny. He also served as U.S. Senator for Mississippi and, of course, became President of the Confederacy in 1860. Davis started as a devoted American who firmly believed in the Constitution; he went from patriot to traitor all without ever altering his fundamental ideals. Is he a patriot or a traitor?

For over 20 years Doug has been nationally recognized for bringing “history to life.” In addition to Nikita Khrushchev (see post here) and Jefferson Davis, Doug has presented literally hundreds of first person presentations from Stonewall Jackson and Henry Ford to Jack Warner and P. T. Barnum. Grand Junction may remember him portraying Hector de Crevecoeur, Ernie Pyle, P.T. Barnum, Henry Ford, and Theodore Roosevelt. The voices in his head keep him busy, but he also makes time to direct and act, run his own theatre company, and teach history at the University of Nevada. Like his idol T. R., Doug believes there is still plenty of time to grow up and get a “real job”—but later!