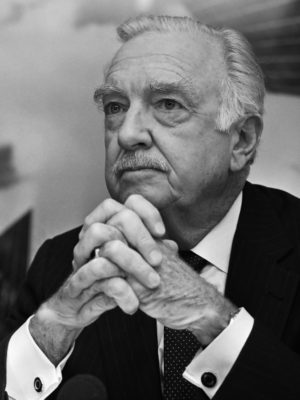 Walter Cronkite’s journey to become America’s most watched and most trusted journalist began as a newspaper boy in Missouri, a newspaper copy boy in Texas, a radio announcer in the Great Depression, and a United Press correspondent in the middle of many of the major battles of World War II.

CBS News hired Walter Cronkite in 1950 while he was working as a radio correspondent in Washington, D.C., and over the next decade his radio and TV reporting earned him his place as successor to the legendary CBS newsman Edward R. Murrow.

Having covered every Democratic and Republican national convention since they were first aired on television, Cronkite became the primary reporter covering the first great news event of the Sixties, the Kennedy – Nixon campaigns for President.

Shortly after taking the reins as anchor of the CBS Evening News in 1962, he extended the program from its traditional 15 minutes to 30 minutes – a first for any network evening news program. The show was renamed the “CBS Evening News with Walter Cronkite.” At the end of that first broadcast he closed with the catch phrase, “and that’s the way it is” followed by the date. He would continue to do so for nineteen years.

As the face and voice of CBS News for such a long time, many of us remember Cronkite as a regular television guest in our homes. We may picture him in his shirt sleeves delivering the shocking news of Kennedy’s assassination in 1963 as he broadcast live all day to a stunned nation.

Or we may see him in his protective helmet and vest reporting with our troops from the ground in Vietnam in 1965 and again during the Tet Offensive in 1968. Many will remember his editorial predicting a stalemate for US forces unless an honorable peace could be negotiated with North Vietnam – five years before the bloody conflict would end.

Perhaps we hear the sound of Cronkite’s, “Oh boy! Whew!” at a complete loss for words and overcome as the rest of the world was by mankind’s landing on the moon in 1969. Cronkite had been there explaining astrophysics to the American public since the space program’s earliest test flights. NASA’s astronauts held the greatest admiration for Cronkite as it was evident to them that he worked very hard to explain their missions accurately.

Cronkite would later claim that the two most important events of the 20th century were the Space Race and the Civil Rights Movement. And we may well remember his reporting of the marches across the South, the assassinations of Dr. King and Malcolm X, the Watts riots, and President Johnson’s signing of the Civil Rights Act.

Across America, Cronkite was a part of it all, from the Beatles to the Mary Tyler Moore Show and because he was – we were too.

And finally, many of us probably remember the night of his last CBS Evening News broadcast in 1981, and his final, “And that’s the way it is…” 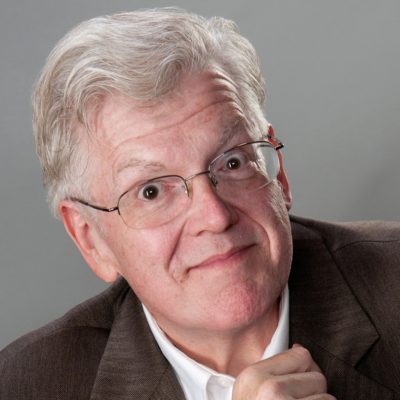 When not reading about the lives and works of America’s most intriguing and productive citizens, he teaches AP English at the award-winning Wade Hampton High School in Greenville, South Carolina. He holds a National Board Teaching Certification and thirty-five years of classroom experience.

Larry lives in Greer, South Carolina, with his wife Carole and their Yorkie-Poos Beau and Dini. He is a long-time member of American Mensa and serves on the board of his neighborhood’s homeowners’ association.

He earned his bachelors degree in theatre and a masters in education from The University of Tennessee and has appeared as a professional magician since the 1970s, including eight years performing for Ripley’s Believe It or Not!