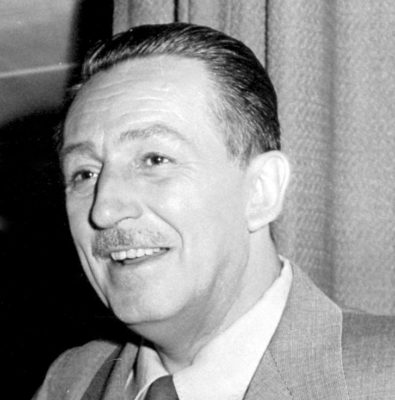 Walt Disney has become a legendary character of the twentieth century. So much has been written about him, and so much is inaccurate, that the legends often attained a currency that was not deserved. How many times have we heard that he was cryogenically frozen? The truth is far more interesting than that.

Disney was an optimistic, hardworking go-getter with an astounding capacity for concentration who fell in love with the early twentieth century’s high technology–motion pictures. Motion pictures drawn by hand. He had the perseverance to start over again every time he failed artistically and financially. And fail he did. This is one of the most unlikely success stories ever told, since the Disney Brothers studio was working in a marginal field (animation) in a minor city (Kansas, then Hollywood, when the animation studios were all in New York), and attempting to make it as an independent producer just as the big studios were forming, eliminating independent competition in all but a few areas by 1928.

He made it because he had the unfashionable idea that quality would win out, he had a tremendous amount of luck and he knew how to make appealing entertainment. (Mickey Mouse was NOT the first successful character he created). Disney also had a real genius for hiring talented people. A surprising number of remarkable artists started with him in Kansas City, others were trained right on the studio lot.

Disney’s weak spot was running the business–he once actually forgot to add on the profit to the budget for a job in Kansas City, and was forced to work for cost of materials, with no salary for him or his animators! The 1941 strike by his artists was seen as a personal betrayal–but this strike can be predicted when you read about that early project. The Dream was the goal but (as an old cartoon states) coal is still somewhat important. Disney had his head in the clouds, and his brother Roy, who played the father’s role to his sibling since childhood, was a major reason why Walt’s feet were kept on the ground. It was a fine partnership. The truth about Disney is not sensational or scandalous– just refreshing after decades of inaccuracy and outright fabrication that somehow passed for fact.

This portrayal by David Skipper will confront some of these myths and misconceptions in a uniquely uplifting and motivational way for all that will leave audiences inspired to dream their own dreams into reality. For more information about David Skipper and Walt Disney visit the Disney Avenue website for a three-part interview at: https://www.dizavenue.com/2017/03/interview-with-walt-disney-incarnate.html 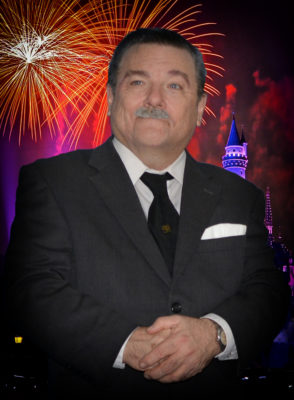 Chautauqua actor and scholar David Skipper brings to life, the World of Walt Disney, as a result of decades of research and study into the life and times of Walter Elias Disney. Skipper has been a Chautauqua performer for over 40 years, performing at Chautauqua Festivals, libraries, book fairs, community colleges and other venues throughout the country.

“My mentor and inspiration has been Hal Holbrook, with his one-man show as Mark Twain,” Skipper said. “I enjoy the spontaneity of bringing these literary and historical characters to life and interacting with the audience as the individual I am portraying would,” he added.

Skipper received his B.A. and M.A. in Communication Arts with a minor in Theater from the University of West Florida in Pensacola.