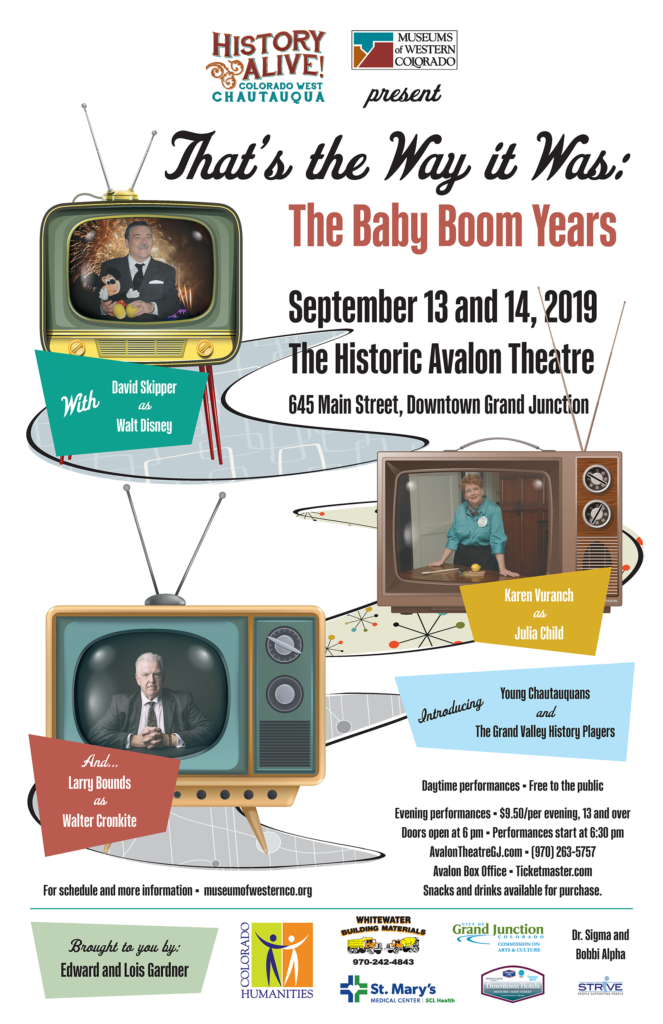 History Alive! Colorado West Chautauqua invites you to take a nostalgic look at the 1950s and 1960s, That’s the Way It Was: The Baby Boom Years. Join us in exploring the years before there was a Disneyland, before French cooking became a part of our culture, and when we all sat in front of our televisions to listen to “the most trusted man in America.”

When it came to learning what was happening in our world, Walter Cronkite was the man we trusted. His connection to and love of the news came from an early age and continued throughout his life. At the forefront of political and social happenings, Walter was a professional newscaster who let us know, “And that’s the way it is…”

A pioneer of animation and film, Walt Disney is best known for creating Mickey Mouse and dreaming up one of the first theme parks in America, a place synonymous with fun, Disneyland! A gifted storyteller, Walt shares the early life stories that shaped and inspired him to create his many films, TV shows, and an Experimental Prototype Community of Tomorrow (EPCOT).

Another visionary who changed our world with her belief that anyone could be a gourmet cook, Julia Child came into our homes and showed us step-by-step how we, too, could serve up French cuisine to our families and enjoy ourselves in the process. Having lived for 20 years in France, she wanted to share the French people’s love of food with Americans, and did so with passion and joy.

Kicking off the Chautauqua event will be a concert with George Gray and the Elvis Experience Band on September 12 at Las Colonias Amphitheater. History Alive! Colorado West Chautauqua performances will be Friday, September 13 and Saturday, September 14 at the Avalon Theater.

Tickets for both the concert and the Chautauqua performances are available at ticketmaster.com.