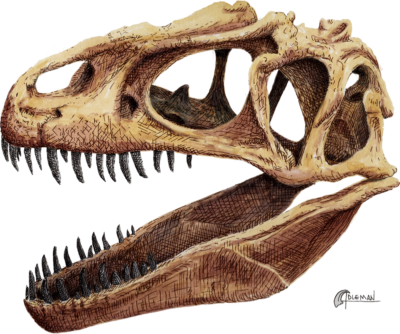 Artist Rick Adleman grew up reading all about dinosaurs. In his youth, he became hooked when, in the 4th grade, Vivian Jones spoke to his class about the discovery of “Dry Mesa Quarry,” and he has been passionate about dinosaurs ever since.

While attending Colorado Mesa University in the 1980s, Rick pursued his passion and became involved with Dinosaur Valley on Main Street. Under the mentorship of then Executive Director Mike Perry and paleontologist Harley Armstrong, Rick worked in the lab as a volunteer. When Perry left the Museum and formed Dinamation International Society in Fruita (the organization that started what is now Dinosaur Journey), Rick joined him and worked there until Dinosaur Journey merged with the Museums of Western Colorado.

It was during his time at Dinamation that Rick noticed a need for dinosaur fossil illustrations. He pursued training with Dr. Robert T. Bakker, a famous paleontologist who was also a dinosaur illustrator. Dr. Bakker mentored Rick in scientific illustration, including Dr. Jim Kirkland’s scientific description of the dinosaur Utahraptor. This was one of Rick’s first big projects with hand-drawn illustrations. 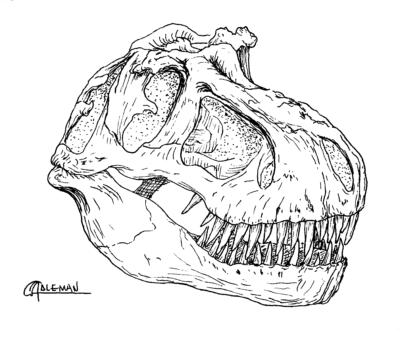 In 2001 Rick began working for Colorado Mesa University and he continues his employment with the university today. Rick has similarly continued his support of the Museum, serving as a former board member as well as continuing his passion for dinosaur art. Rick now donates his dinosaur artwork to Dinosaur Journey. All proceeds profit Dinosaur Journey – Rick’s way of donating back to the Museum and supporting the effort that he believes in. Matted copies for his artwork ranges from $25 for 5″x7″ to $35 for 8″x10″ and may be purchased in the Dinosaur Journey gift shop.