Boy on a Bike, a Snapshot in Time • MWC 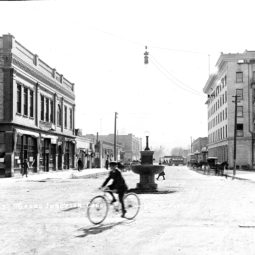 Shown is a photograph, a window in time, at 5th and Rood Street. A boy rides by the camera lens of local photographer, Frank Dean, in the distant past of Grand Junction, Colorado.

A study of the undated picture inclines one to wonder of that boy and the people caught in time of days long gone.

We see the day is clear for the photographer to set up his camera and catch the boy as he happens to ride by. There are no shadows on the street so it’s probably around noon and fall or winter judging from the heavier clothing the people are wearing.

The buildings in the picture; the Odd Fellows Hall, Bailey’s Grocery, the old bank on 5th and Main, the Fair Store on the opposite corner, and the shoe repair shop are in place by 1913. The trolley car down the block went in to service in 1909 and the fountain in the middle of 5th and Rood for horses and dogs was installed in 1911. The street is still unpaved, that went on until at least 1914. The number of buggies on the street and lack of any automobiles give us a clue that it’s before World War I.

The United States is just starting to react to the invasion of the United States in New Mexico and Texas by Poncho Villa. However, on this day in Grand Junction, people are shopping at Bailey’s grocery store, going to the shoe shop, riding the trolley home for lunch, or maybe just eating down town.

Through eyes of our time, we might ask how much did this boy spend of his hard earned money to buy this bike. Or was it a special gift? Did the First World War claim him as a soldier in 1918 or affect his family with the flu of 1919, or the depression of the 1920s; did his children fight in the Second World War? Or did he live to old age and die a happy man surrounded by family?

Wonder where he is going on his bike that day? To play? To fish? An errand for his Mother… But he is dressed a little better than usual, maybe he’s off to a special event or church. As he rides by, on his bike on his journey from here to there, we hope he found what he was looking for and had an outstanding, wonderful life.

He is our “Forever Puck.” Our dreams, our vision of childhood, with our dog days of summer, where there’s always a merry-go-round, a fair, friends, picnics, football games, eating ice cream, and loving parents where nothing bad will ever happen. A place where we never grow old, frozen in time, just like the Boy on a Bike.

The hope and joy for this boy is bright and he has everything a boy needs at this moment, his bike.

Story Teller of the Tribe, Finder of Odd Knowledge, Uninteresting Items, A Bore to his Grandchildren, a Pain to his wife on spelling, but a Locater of golden nuggets & truths and pearls of wisdom.