Alfred Read Gallupe, Grandson of General George S. Gallupe of the 5th Pennsylvania Heavy Artillery during the Civil War and later of the Plains Wars with General George A. Custer, was injured September 22, 1913 during a freak windstorm in front of the local YMCA Building and passed away four days later on Sept 26, 1913.

Alfred, the 12 year old son of the late John H. Gallupe and Ella Gallupe of Grand Junction died after being hit on the head from the falling roof balustrade, beams, bricks and mortar on the east side door of the YMCA at the corner of 5th and Rood. 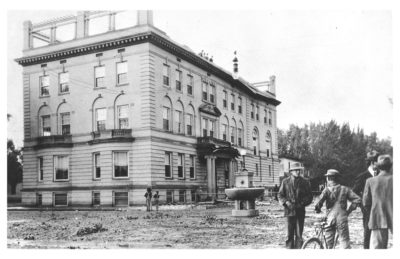 Alfred and his classmates were in the Lowell Elementary School on the east side of 5th and Rood (where Grand Junction City Hall stands now) when a huge wind storm came up. The principal fearing the cottonwood trees around the school were going to blow into the school released the children from school to run home.  The wind was so strong that upon leaving the school the little daughter of C.L. Watson was picked up and blown bodily across Rood Ave. Amazingly she did not sustain any injuries. Three or four of the girl students from the school had to hang onto the trees in front of the school and were there for over 20 minutes.

Alfred and his friend Elmer Shropshire ran across 5th street to the east side of the strong stone, three story YMCA building with some of the other school children to get out of the blowing wind. Along the way Alfred stopped to help Mr. Strouse, owner of the Little Green Shoe Shop, who had lost his hat and umbrella.  Alfred asked Mr. Strouse if he needed help and was told that the umbrella and hat were ruined in the mud, but Mr. Strouse thanked the boy for his kindness. Strouse said he turned and saw Alfred start across the street to be with his friends by the building. Elmer Shropshire reached the building first just as the roof fell, hitting him on the head but only leaving a minor scalp wound and bruise. Alfred was right behind Elmer and took the brunt of the blow with the beams crushing his head. Spectators including one other classmate James Gormley saw Alfred on the ground writhing and groaning; he was given anesthetic and taken to the home of his birth at 1016 Main Street. He fought terrible odds with a superhuman tenacity, and rallied the day before his death. Hope never left the family, but Alfred never regained consciousness, and passed away on the 26th of Sept 1913 at his home.

Floral pieces covered Alfred’s bier at his funeral in the family home at 1016 Main Street. The following schoolmates were his pallbearers, Leland Schen, Frank Munson, Bernard Ebner, Robert Whipple, DeForrest Northrup and Robert Caldwell. The funeral cortege was followed by a long line of carriages to the Orchard Mesa Cemetery where he was buried next to his father, John.

Alfred’s family, parents John H. & Ella Provost Gallupe and their son George II had moved to Grand Junction in 1899 because of John’s health issues. The family bought a home at 1016 Main Street. This is where Alfred was born and died.  His father had predeceased him in 1907 while working for the Mesa County Clerk & Recorder’s office. Ella needing employment took John’s place in the Clerk’s office.

Alfred had just recovered from being badly burned in the eyes in early 1913 by a black powder explosion on the Redlands. He and two of his friends had found a bottle of powder and were trying to light the powder when it exploded burning the boy’s faces. He had just regained his eyesight when the YMCA accident happened. 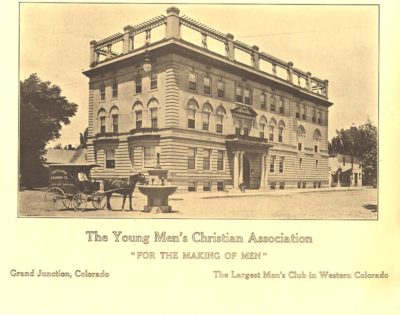 Alfred was known in the community as an enterprising young man who had his own business selling the Saturday Evening Post to help his widowed mother and older brother George with expenses. He always had a cheery disposition and personal charm along with a tireless energy as he went about his business. He was becoming a regular young Horatio Alger success story. He was friendly and helpful to all and his last act was of a kindness to a fellow man, Mr. Strouse, in distress.

The storm that caused the accident in Grand Junction had gale force winds of over 60 miles an hour. In addition to the damage to the YMCA, the roof of the Majestic Theater on Main Street was plunged into the street. The plate glass windows in the Fair Store, were blown out and Frank Du Cray narrowly escaped serious injury when the glass fell on him. The La Court big brick chimney blew over and fell into the second floor of that building filling the dining hall with wreckage. Most of Main Street and surrounding area suffered major damage, trees blew down the trolley wires, the storm cut all the power to the city of Grand Junction, and the Daily Sentinel was published by hand power after trying to use motorcycles attached to the linotypes and presses.

After Alfred’s death, Ella Gallupe’s mother, Mrs Rebecca Provost came from Pennsylvania to live with her daughter and surviving grandson George II at 1016 Main Street. She remained with them until she died in 1922 and is buried next to her grandson in the Orchard Mesa Cemetery. She wanted to be buried next to “Little Brother” as she called Alfred.

Ella’s surviving son, George Gallupe II attended Grand Junction High School and was a veteran for the First World War from Grand Junction. George II married Alice Robbins May 5, 1922 in Grand Junction. It was a joy for his mother Ella to issue the marriage license to her son & new daughter in law. George II died in 1935 and is buried in La Plata County. George II and Alice had two Sons: George & Jack Gallupe who both served in World War II and today there are still members of this family alive in Colorado.

Ella Gallupe continued to work at the Mesa County Clerk and Recorder’s office at 6th and Main Street (now the Main Street Bagel Shop) and was in charge of moving the Clerk’s office to the new Mesa County Courthouse at 6th and Rood. Ella was elected the first Woman Mesa County Clerk and Recorder in 1921 and held that position until she moved to Portland, Oregon to marry an old school friend from back east, William Knox Johnson. Ella lived in Oregon until the death of her second husband, and then returned to her home at 1016 Main Street.

Ella Gallupe Johnson died in 1944 at her home at 1016 Main Street, Grand Junction and is buried next to her husband John, son Alfred and mother Rebecca in the Orchard Mesa Cemetery in the Masonic Section.  She and John had lost a son before moving to Grand Junction with George II.  She outlived all three sons, two husbands and her parents. 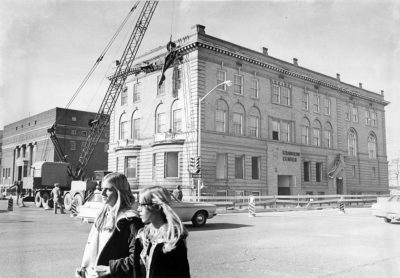 The problem with the YMCA building roof which took Alfred’s life was not the first time the roof had blown off. Fortunately no one was hurt during the previous mishap. The top of the building was used for dances and other events in the city because of the view of the valley. The roof top event center was removed because of Alfred’s death and continuing safety reasons. Later photos of the YMCA show the top floor center removed.

The YMCA was torn down in 1969 and the Masonic Lodge next to it in 1972 to build the Valley Federal Building in 1974. Today the Alpine Bank occupies the space of the old buildings. 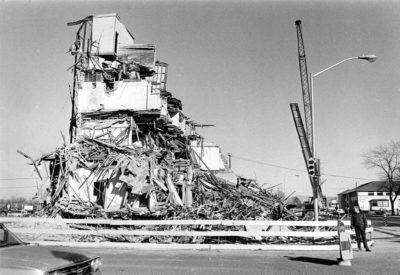 There are five places in Grand Junction that one can see today that will show you the mark left upon this city by the Gallupe Family. 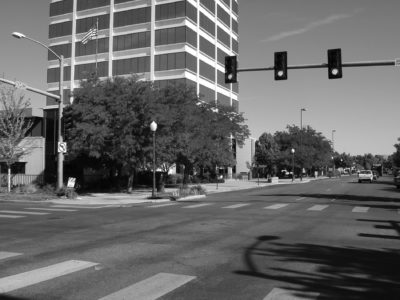 All this happened 98 years ago on September 22, 1913 in Grand Junction, Colorado.

Next time you walk by Mr. Moyer’s statue on 5th Street outside of Alpine Bank, say hello to Alfred, the forever cheery kind boy of Grand Junction.

Finder of Odd Knowledge, Uninteresting Items, Boring to his Grandchildren, a Pain to his wife on spelling, but a Locater of golden nuggets & truths, & hundreds of hours in the newspaper files.