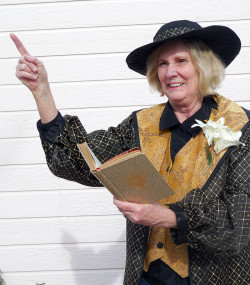 A woman ahead of her time, Aimee Semple McPherson was an itinerant preacher, radio broadcaster and founder of the Foursquare Church. Unfortunately, she is probably best known for her mysterious disappearance involving an alleged/unsubstantiated kidnapping which overshadows the work that was most important to her. An unconventional woman, she did whatever was necessary to reach her audiences in ways that touched a chord with the American people of the 1920s.

Aimee’s calling came early in her life when, as a teen, she met minister Robert Semple at a Pentecostal meeting, was baptized, fell in love and later married him. Together they moved to China to work as missionaries where they both contracted malaria and Robert died. Eight months pregnant and alone, she returned to the United States where she gave birth to her daughter, Roberta Star. Two years later she married Harold Stewart McPherson and then had a son, Rolf Potter Kennedy McPherson.

While she tried to be a good wife and mother, she kept feeling the call to preach and soon took to the road with her children, leaving her husband behind. Driving across the country in her “Gospel car,” she organized revival meetings on the road. As a woman, she was one of the first to drive cross-country without a man. As an itinerant preacher, she made no distinctions among those she wanted to reach, organizing separate meetings for African Americans in places where they were not allowed to mingle with others. Unusual among the evangelicals, her messages emphasized hope and love rather than the more typical hell and damnation approach. Her revivals were well attended and her popularity grew.

After years of traveling, she established her headquarters in L.A. and eventually decided to settle there, raising funds to build what would become the Angelus Temple. With seating for 5,300, Aimee’s services were consistently filled to capacity with people arriving hours early to get a seat. She became “Sister Aimee” to her followers and was best known for her healing ministry and her distinctive approach. Her style of preaching bordered on the theatrical and often involved elaborate stage settings, dramatized musical productions and storytelling. She had set designers, a lighting crew and a choir of over 300 members that she put to good use. Located as she was in the center of the entertainment industry, her unique style was especially appropriate for the audiences she attracted.

Aimee recognized the power of reaching other audiences and became the first woman to use radio to broadcast her messages and later built her own radio station KFSG (Kall Four Square Gospel) which was one of the first full-time religious radio stations.

With all the good that she did, it is still her disappearance which is the first thing that people now remember when they hear the name Aimee Semple McPherson. In 1926, while swimming, Aimee disappeared. She was presumed drowned after repeated searches yielded nothing. Her disappearance was mentioned in the news an average of three times a week and there were “sightings” reported all across the country. Angelus Temple received ransom notes, but nothing came of them. Over five weeks after her disappearance, Aimee called her mother from Douglas, Arizona with a terrifying story of having been kidnapped and held in a small shack in Mexico. She was welcomed home by thousands of joyful followers at the train station, but ended up in a grand jury trial to determine what had happened.

The press that had so supported her now scrutinized her life and sensationalized the possibility that she had actually run off with a former co-worker for an illicit affair. Testimonies were unreliable and charges of conspiracy to manufacture evidence were dropped, but the questions were there and never fully resolved. Sticking to her story throughout her life, Aimee returned to preaching until her death in 1944; still one of the best-known and charismatic evangelists of the 1920s and 30s.

Join us at the Two Rivers Chautauqua September 18th and 19th to hear Aimee Semple McPherson’s story as portrayed by Doris Dwyer.