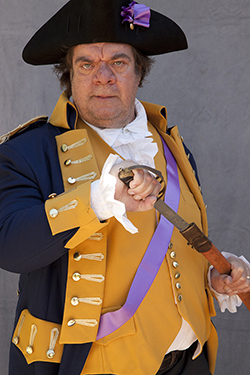 At this year’s Chautauqua, we’re bringing in the “Rascals and Rogues.” First among them is infamous General Benedict Arnold (V). Druggist, bookseller, smuggler and skillful and courageous general of the American Revolution, he is best known for betraying his country. He was, however, also called the “Greatest General” by George Washington. Who was this general whose name is synonymous with being a traitor? What could change a man so?

Knowing his family history makes Benedict Arnold’s story more tragic. The first Benedict Arnold was the Governor of Rhode Island. Benedict’s father (III), one of Connecticut’s most prosperous shipowners, lost the family’s fortune, forcing young Benedict to begin working to help support the family. From then on, making back the family fortune was one of his driving goals. He found his niche in the army of the American Revolution.
An ardent leader of many battles, Arnold captured Ft. Ticonderoga, blocked the British at Quebec, was wounded in Saratoga and drove the British out of Danbury, CT. Unfortunately, the credit for Ticonderoga went to Ethan Allen’s Green Mountain Boys, five junior officers were promoted above him while he was fighting in Quebec, and he was then accused of stealing; he demanded a court-marshal to prove his innocence. Although he was exonerated, Washington reprimanded him. He had fallen from the heroic “Greatest General,” impinging Arnold’s honor and crushing his desire to support the Americans.

Instead he became disgruntled, wounded in spirit and body and resentful of the lack of acknowledgement, advancement, and compensation he received. He married Peggy Shippen, his second wife, who was an affluent British sympathizer. With his new command of West Point, he decided that he could end the war by turning West Point over to the British and joining their side of the fight.

With this move, the British made him a General and tolerated him, but he was reviled by the Canadians and would have been killed if he stepped foot in the Americas again. He ended his life in London as a man with no country, belonging to no place, who professed until he died that he did all that he had “for the love of my country.”

Titles Recommended by Frank Mullen include:

Benedict Arnold’s Army: The 1775 American Invasion of Canada During the Revolutionary War, by Arthur Lefkowitz, 2008.

Benedict Arnold’s Navy: The Ragtag Fleet That Lost the Battle of Lake Champlain but Won the American Revolution, by James Nelson, 2006.