More than 20,000 fossil specimens. 19,000 historical artifacts. These are the estimated outputs of a 40+ year partnership between the Bureau of Land Management (BLM) Grand Junction Field Office and Museums of Western Colorado (MWC). Working together, these two regional institutions have made significant contributions to the global scientific community while ensuring that historical artifacts and paleontological specimens remain local for residents’ and visitors’ benefit.

The BLM’s local field office oversees both the Dominguez-Escalante and McInnis Canyon National Conservation areas, a total of 333,000 acres in public lands. Whether found via formal research (e.g. fossil excavations) or uncovered by human activity (e.g. unearthed during trail building efforts or by casual day hikers), hundreds of items of historic and/or cultural significance are discovered in these conservation areas every year. When this occurs, the discovered items are delivered to the Museum to be recorded and inventoried. The BLM and Museum then work together to compile data on and interpret the items, with the Museum archiving and/or making the antiquities available for public presentation.

“Without this partnership, the preservation of thousands of specimens and artifacts would be in jeopardy and possibly never occur,” says Museum Executive Director Peter Booth. “And, this is a great way for the Museum to obtain material of historic and cultural value from the region. What is found in McInnis Canyon or the Dominguez-Escalante area will end up in the Museum’s hands, rather than somewhere else entirely, keeping the heritage where it originated.” 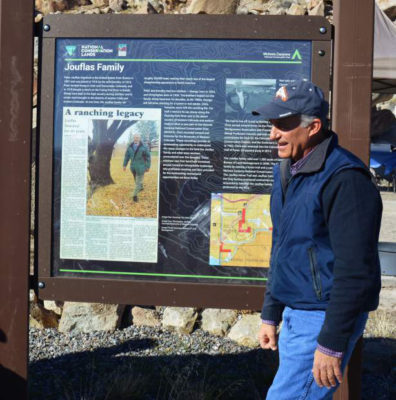 Common goals drive the public-private partnership between the BLM and Museum. McInnis Canyon National Conservation Area Manager Collin Ewing says, “The BLM’s responsibilities include conducting educational services for areas under our management. The Museum helps us meet BLM educational goals and objectives by inventorying items and sharing information with the public, and by offering its expertise. The Museum also does a great job of physically getting the public out to various BLM locations by offering tours to these sites.”

Current BLM-MWC joint projects include installation of a series of historical informational panels at the Jouflas Campground in Rabbit Valley, and historic panels that walk visitors from the Fruita Paleontological Area parking lot to the recently-restored Skinner Cabin.