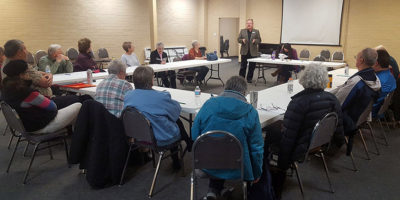 Curator of History David Bailey shares the history of the Museum with the class.

Day one of the museum class went overwhelming well. We had more educationeers than had originally signed up for the class. The excitement level was high, and everyone was eager to learn about everything that the Museums of Western Colorado has to offer our community.

Our Executive Director Dr. Peter Booth talked to us a bit about his background, shared with us a few historical artifacts, and even let us play with toys that predated those of us in the room.  Curator of Education Rob Gay got us pumped about dinosaurs and other ancient beasts from the area by highlighting his passion for paleontology and the rad things he is currently researching in the newly designated Bears Ears National Monument in southeastern Utah. Not a single kid was in the room, but the energy had a youthful enthusiasm. One educationeer even expressed a general disinterest in dinosaurs, but was fascinated to hear Rob connect these ancient monsters to the prehistoric environments and global paleoclimatology at the time. Dave Bailey, Curator of History, then took the group on a tour of historic downtown Grand Junction, where we saw that residents and architectural designers of Grand Valley have left their mark on the cities that are visible even today. 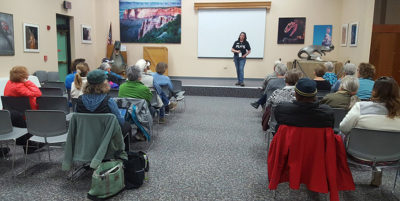 Curator of Paleontology Dr. Julia McHugh taught us about the history of Dinosaur Journey Museum, how fossils are made, and how you can tell you’ve spotted one in the field.

Day two of the museum class took us to the Dinosaur Journey Museum (DJ), where Curator of Paleontology Dr. Julia McHugh taught us about the history of DJ, how fossils are made, and how you can tell you’ve spotted one in the field.  Rob and Julie then double-teamed a tour of the exhibit halls, fossil prep lab, and collections, where thousands of fossil specimens have been cataloged and curated. Rob then took us out to a few world-renowned fossil sites in the Grand Valley, where several new species have been named and where one species was debunked. The paleontological wonders of the Grand Valley could not be contained in a single day trip, so Curator Rob Gay extended the class to include another field day on March 13, during which we will visit the famous Mygatt-Moore Quarry and learn how DJ creates opportunities for all to become field paleontologists for a day. 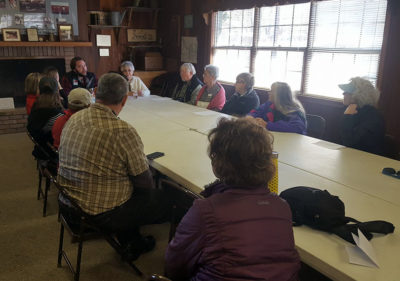 At Cross Orchards Historic Site, Site Manager Taylor Barnett gave us a glimpse into what agriculture looked like in the Grand Valley more than 100 years ago.

Day three of the museum class took us to Cross Orchards Historic Site, where Site Manager Taylor Barnett gave us a glimpse into what agriculture looked like in the Grand Valley more than 100 years ago.  Two long-time volunteers and museum educationeers, Sandy and Judy, led the group around the 243-acre living history museum that houses vintage farming equipment, period shops, and the largest collection of Uintah Railway cars on the Western Slope.

Our first three classes have been a success! Many educationeers have already expressed interest in becoming volunteers for the Museums of Western Colorado, expanding the reach of the museum in our community.