Two Big Feet and Jumping In: My First Days at Dinosaur Journey • MWC 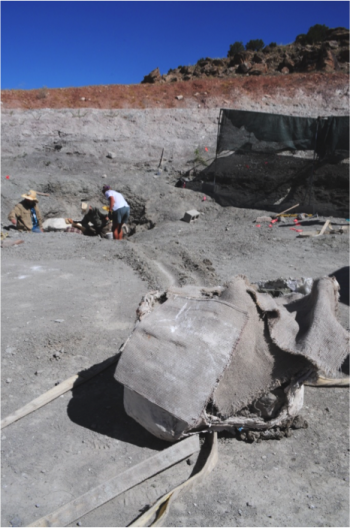 My first days at Dinosaur Journey were fast, furious, and full of excitement – just the way I like it! When I arrived at Dinosaur Journey, the summer field season and Dino Dig program were already in full swing at the Mygatt-Moore Quarry. With the cooperation of the Bureau of Land Management and the untold hours of volunteer and dino digger work, a giant femur ofApatosaurus was nearing the end of its excavation. But before we could tackle removing this 6 foot and 7 inches beast of a fossil, we had to pull a smaller block of rock and bone out from in front and partly underneath it.

This jacket contained vertebrae, part of the back bone, of an herbivorous sauropod dinosaur, possibly also Apatosaurus. A projection of bone from one of the vertebrae in the jacket was jammed underneath of the large femur. This created a big worry for those of us working the quarry, because we knew the femur was riddled with cracks (thanks to our very wet spring) and, without the support of the vertebrae jacket and process lying underneath, the femur may begin to crumble out from below. Luckily, there was a large fracture running through the process near the femur’s edge. It was along this fracture we hoped that the two blocks of bone and fossil would separate from each other. When we pried the jacket free, the process broke cleanly along the existing fracture. We were then able to safely incorporate the process into the plaster jacket of the femur. I held my breath when it broke, but I knew if things went awry we had a large cadre of talented and experienced volunteers and field coordinators to help set things straight. I am so thankful for their wonderful support in the quarry and in the prep lab. I can’t imagine how I would even begin to do my job without them! I cheered as the vertebrae jacket was gently pulled by Mike Perry and his truck from the Mygatt-Moore Quarry. We had prepared for the worst, and were rewarded with the best case scenario: a clean break and two stable and separated jackets of bone and rock.

We plan to reunite the pieces of the vertebrae still in the femur jacket with the removed jacket back at Dinosaur Journey after the femur is pulled from the quarry later in July. The vertebrae jacket is now inside the Dinosaur Journey fossil prep lab, waiting patiently for its turn to be opened up, rock removed, and fossils repaired and cleaned for scientific study.

The jacket’s removal was featured in an article by Rachel Sauer in the Saturday, June 28th edition of The Daily Sentinel. Be sure to check it out for more details on my nail-biting first Friday as Curator of Paleontology at the Museum of Western Colorado.