In the sweltering deserts of southeastern Utah lies a treasure trove of natural and cultural history. Rocks dating back almost half a billion years are exposed in harsh ridges, deep canyons, and forested plateaus. Fossils of strange, sail-backed amphibians, plant-eating crocodiles, and enormous dinosaurs can be found across this region, while the remains of more recent life wait to be found. Sloths, bison, American horses, and other large animals roamed the land during the last Ice Age. More recently, groups of Native Americans lived as hunters and gatherers, and later farmers, in this arid, harsh land. They built tall towers perched on canyon rims and walled-in dwellings in sandstone alcoves. They left behind an incredible outdoor art gallery comparable to any modern museum collection. Today millions of visitors from across the globe travel to this region to experience the majesty and wonder of this special place: The Bears Ears.

People have long recognized that the Bears Ears region is special. Even after the Ancestral Puebloan people left their cliff-side redoubts in the late 1200s, numerous Native American groups have used the land even up to modern times. The high country of the Abajo Mountains and Elk Ridge provides cooler temperatures, along with forage and water for Navajo and Ute sheep, alongside Anglo ranching stock today. The Hopi and Zuni peoples still visit sacred shrines near long-abandoned villages. Tribal members still gather herbs, plants, and minerals important to ceremonies carried out for many centuries now. 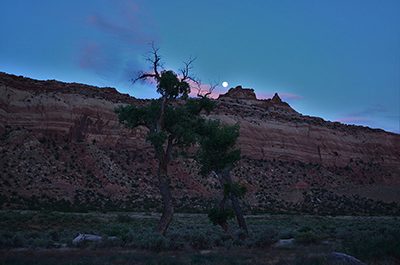 Ango-American settlements of the region didn’t begin until the late 1800s. In 1880 Silas Smith and the San Juan Mission from southwestern Utah crossed rugged Comb Ridge and entered into the flat lands along the San Juan River. Here they founded the town of Bluff, a bastion of the Church of Jesus Christ of Latter-Day Saints against American settlers encroaching from the New Mexico Territory to the south and east. It also served as a base of operations for missionary activity on the Navajo Nation, established by treaty in 1868, just across the river. When the land didn’t prove as fertile as the settlers had hoped, they moved north in 1905 and settled the town of Blanding, on the southeast flanks of the Abajo Mountains.

Elsewhere in the Bears Ears region, oil was discovered to the west of Bluff in 1882. Soon a new hamlet sprung up on the north side of the San Juan River. Named after a distinctive rock formation and in the colorful shadow of Lime Ridge, Mexican Hat became one of the first tourist towns in the southwest. Starting in the early 1930s, Norm Nevills began offering river running trips down the untamed San Juan River. This, along with the Hatch Brothers from the Vernal area, helped kick off river running as a legitimate recreational activity.

By the end of the Second World War it became apparent that uranium was going to be in high demand to help usher America into the atomic age. The Bears Ears region was vital to the nation’s push to acquire uranium as the Cold War heated up. Many of the modern highways, paved roads, scenic byways, National Park roads, and dirt tracks still in use today were originally blazed by prospectors looking for uranium. Across the river from Mexican Hat, near Blanding, and at Monticello, there were uranium mills for processing the raw uranium ore into yellowcake. Mines ranging in size from small “dogholes” to massive underground operations sprung up across the Bears Ears area. These mines were mainly exploiting uranium deposits in the Chinle Formation, but trace amounts of uranium could be found in other rocks as well, including the Morrison Formation. Many of these mines were never reclaimed and still exist, providing a glimpse into the life of those hardscrabble miners from the middle of the 20th century. 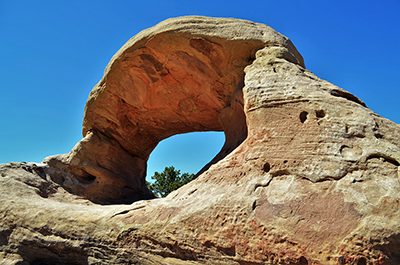 Around the time that the uranium boom was fading a new boom entered the area. Fueled by America’s growing middle class and prosperity, people began to flock to the West. Families ventured into the high deserts of the region to recreate by climbing, hiking, rafting, and camping. As they did, they began to build the support base for the modern tourism industry across the southwest in general and the Bears Ears in particular.

Today, millions of people from across the globe visit the Bears Ears area, pumping millions of dollars into the local economy. People are rafting down the San Juan River, hiking to ancient ruins on Cedar Mesa, climbing in Indian Creek, driving all-terrain vehicles on Elk Ridge, and generally experiencing the area more than ever. This increased visitation has brought world-wide attention to the area as well, and as the number of visitors has increased so has the pressure on the natural resources. Native American rock art and ruins are being vandalized and looted. Paleontological sites have been damaged by careless ATVers and recreational shooters.

Locals and visitors alike recognize that the area needs additional protection to deal with the increased visitation, as well as to help us better understand the 300 million years of stories present in the area. Utah’s congressional delegation has proposed a National Conservation Area for the region that would encompass most of the scenic wonders while leaving energy exploration available in other parts of the region. Another proposal, put together by five Native American tribes with historic and prehistoric ties to the area, is to create a National Monument that would encompass a larger area and give Native peoples access to historic resources while safeguarding the natural and cultural resources that abound in the area.

To date, neither proposal has outright supported explicit protection of paleontological resources within the Bears Ears area. This is unfortunate as active research within the region shows that it contains some of the oldest dinosaurs found in North America, one of the only examples of Native Americans directly and purposely interacting with dinosaur fossils, and several new species of fossil animal that have barely being described. Additionally, this area has received very little in the way of paleontological attention so the potential for future discoveries is practically unlimited. Museum Curator of Education and paleontologist Rob Gay has been working to ensure that all parties are aware of the significant paleontological resources present within the Bears Ears area so that they can be protected.

Are you curious about the area? Want to learn more about the resources found there? Well, you’re in luck! The Museums of Western Colorado will be offering two Passport to Adventure tours of the area, plus a “Dinosaurs and Rock Art” paleontology/archaeology tour in 2017 so you can experience this remarkable area firsthand!

Also in the planning is a talk on Bears Ears in mid-October. Watch eblasts and our website for the date!