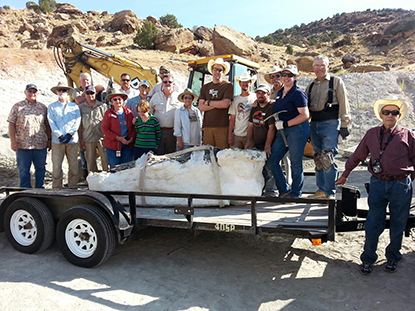 Think you need a fancy degree to do important scientific work? Think again.

This week scientists confirmed that a huge dinosaur bone unearthed on a dig in Colorado is the largest apatosaurus femur ever discovered — and it was found not by professional paleontologists but by a volunteer named Kay Fredette.

“Dorothy and I were working on some bones… and came across this lump and thought, ‘Oh my goodness, we found another vertebra,'” Fredette told local TV channel KREX, referring to the discovery she and a fellow digger made. “Well, then we got to the back side of it, and it swooped back up again.”

The bone, which measures 6 feet 7 inches, belonged to an Apatosaurus estimated to have been 80 to 90 feet long, according to Robert Gay, a paleontologist at the Dinosaur Journey Museum in Fruita, Colo. Read more here.

Kay Fredette, one of the volunteers who first discovered the femur:

“I am happy to say I knew the two couples, the Mygatts and the Moores, whose discovery of the site made this all possible. They were rock hounds out for a stroll and, on sitting down to rest, realized they were next to a vertebra weathering out of the Brushy Basin member of the Morrison Formation. They reported the find to the Museum of Western Colorado and the rest is history, as they say. The museum’s paleontologist, Harley Armstrong, began excavating the site. At the beginning the quarry was the size of a bathtub. The volunteers under his direction started digging and whew! Look at us now!

I have been a volunteer preparator and quarry instructor since 1986. It has been so exciting finding and cleaning and reassembling our finds. Each time we find a new bone it is the first time it has been seen by humans! In the years of excavation the crew has found at least one ‘new to science species,’ the ankylosaur known as Mymoorapelta, described by paleontologist James Kirkland. We have a cast of the animal on display in our museum reproduced from our collections by local artist Rob Gaston. His models are on display in many museums.

As for the big drumstick we pulled out today it may be the largest Apatosaurus femur ever. We found the first hint of it in 2010. At the first look it seemed to be the centrum of a vertebra, then it flared up into another condyle proving it was the distal end (knee end) of a really big femur. It took us into our fifth summer to fully expose the whole thing. We think it may prove to be at least 6′ 7″ long. Exact dimensions won’t be available until it is fully prepared which may take as long as two years.

Now we get to get to work on exposing the half dozen new bones that were found in the trench and walls as we tried to put a jacket on the “big drumstick”. The quarry goes on…and on…and on.”

“Kay and Dorothy started uncovering it in August 2010. Thought it was a vertebra at first, when they first uncovered a little corner of the distal condyle. They told ReBecca (Hunt-Foster), who groaned. None of them wanted another vertebra, as we’d just battled several months to get out a couple of them nearby. But then they found the other condyle and the shaft going into the hill. “Well, let’s see how far it goes,” I said. I was expecting, based on what we had so far, at least another three feet, but then it just kept going and we never did finish uncovering the whole shaft that season. Took until 2011 until we got the whole thing uncovered. Then began two full seasons and two partials, battling to get a trench around it and get things out of the way, a vertebra here, a pubis there. And the whole time, we kept looking at it thinking it really looked big. Every few weeks I’d measure it again because I was convinced I would be more accurate this time. It kept being more than 1800 mm, give or take, and when I checked my notes I couldn’t find any femur I or anyone else had measured out of the Morrison that was longer than that, other than Brachiosaurus (also from Mesa County, coincidentally).”

I arrived at Dinosaur Journey at the end of June 2014, and the femur was already close to the end of its excavation. My goal was to have it out of the ground before the end of July. We started by removing a small block with a vertebra in it from in front and underneath the femur on my first Friday on the job. This was a tricky pull because part of the vertebra was wedged underneath the femur. We were lucky and got a clean break to remove the vertebra and then incorporated its remaining pieces into the femur’s jacket.

Little by little over the weeks we widened the trench around the femur, reinforced the plaster jacket with more and more strips of burlap, and even strengthened the femur with two 4x4s and four pieces of 2x4s to build a ladder that would frame the shaft of the femur and keep it stable during the lift. Every day, we were slowed by finding more and more bone in the wall of the trench, but eventually we were able to get it wide enough to begin undercutting the shale beneath. We dug two tunnels underneath and lined their roofs with plaster and burlap; this was where we would run the straps around the femur. There were two bones that were still partially underneath the femur and we were forced to cut chunks of them out of the way and save the pieces for reassembly later in the lab.

We lifted the femur on July 17th and it rolled over and lifted out perfectly! We were so excited to have everything go so smoothly. We are so thankful to the BLM for their support and the City of Fruita for lending us their backhoe to lift the femur out of the pit and load it on the trailer. The entire block of stone, fossil, burlap, wood and plaster weighed 2800 lbs! It is now housed at Dinosaur Journey in the prep lab and we cannot wait to dig into the jacket and reveal the full femur inside.