Join the Museums of Western Colorado’s guest lecturer Rob Gay, Director of Education for the Colorado Canyons Association (CCA), as he presents new findings on a fossil identified as the oldest dinosaur bone found in the State of Utah. This guest lecture will be held at Dinosaur Journey in Fruita on March 9 at 7 pm, free of charge, and will highlight the results of an article published in the Utah Geological Association’s journal Geology of the Intermountain West that identifies this fossil from the Late Triassic Period (220-200 million years ago).

The collaborative efforts of three paleontologists – Xavier Jenkins with Arizona State University’s College of Liberal Arts and Science, Dr. John Foster with the Museum of Moab, and Robert Gay with CCA – resulted in this publication, and identifies this fossil as belonging to a small meat-eating dinosaur that roamed the area known as Utah.

“This animal was buried less than 100 miles away from Fruita, 220 million years ago. Historically, fossil finds from the west have been taken back east, to Chicago, New York, and Washington. It is great to see more local institutions holding onto the significant parts of the regional history,” says Gay. 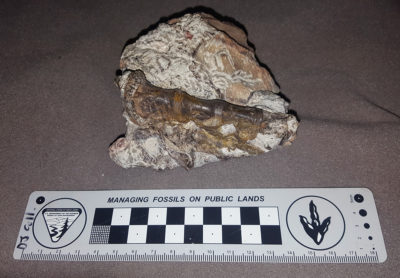 Not only is this fossil a vital piece of our culture, it also helps piece together the history of an era when no humans were alive to witness. By piecing these links together, paleontologists are able to paint a clearer picture of periods previously unknown.

“This dinosaur is important to the story of the Colorado Plateau because it not only shows us a little of what Utah’s oldest dinosaurs looked like, it is also the furthest north anyone has ever found a dinosaur of this age. Most Triassic dinosaur bones in the United States are found in Arizona, New Mexico, and Texas. This find may help us better understand how dinosaurs spread across North America during this time period.”

The sacrum fossil is currently housed at Dinosaur Journey in Fruita.