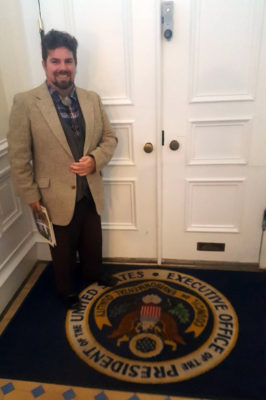 On Oct. 31, 2016, I was invited to speak in Washington, D.C., to the White House Council on Environmental Quality, the USDA Forest Service, and the U.S. Department of the Interior. Why? To provide information and expertise on the paleontological resources of southeastern Utah, an area that has been receiving intense scrutiny as one that needs additional protection for its natural and cultural resources. As a paleontologist who has spent almost all my career working in and researching this region, I was in a unique position to provide information to our government that could help ensure that research into this incredible area would not be overlooked or hurt by any decision that was made.

At the time, two proposals were on the table. One, a bill in the House of Representatives co-sponsored by Reps. Bishop and Chaffetz, would have designated large portions of southeastern Utah as National Conservation Areas, settled the status of many pending wilderness study areas, and transfered portions of federal land to the State of Utah or “disposed” of it to private buyers. The second proposal was by a coalition of Native American tribes in the region to create a Bears Ears National Monument. It would protect more land than the NCA proposal while not disposing of land to private buyers or to the state. Both proposals had merits but of greatest concern to the Museums of Western Colorado was the fact that neither of these proposals addressed paleontological resources. The bill sponsored by Bishop and Chaffetz only suggested that a “person with paleontological experience” serve on an advisory board for the proposed NCA while the National Monument proposal had no mention of paleontology at all.

During the start of 2016 I attempted to address these issues. I began writing and speaking to people and groups on both sides of the conservation issue. Although I never heard back from the team working on the House bill in any meaningful way, I did get a chance to speak to the Secretary of the Interior, the director of the BLM, and several other folks during a public hearing in Bluff in June. In September I was asked if I would be willing to present about paleontology in the region to the administration and the agencies involved. Despite never having been to Washington, D.C. before, I was thrilled at the opportunity. Despite going to the most political location in the United States a week before a bitter presidential election, the attitudes of everyone I met there was cordial and non-partisan. It was great to have a receptive audience for the message too; paleontology is important, new discoveries are coming out of this area now and it has been poorly researched in the past, and acting without including paleontology in either congressional legislation or a monument proclamation would adversely impact future work. This is the same area where MWC successfully ran a youth paleontology field school last year, and any action by the administration that didn’t address paleontology would severely hurt our efforts to continue that nationally acclaimed program.

As of this writing, the Bishop and Chaffetz bill has died in the House but the Monument proposal is still alive. Whether or not the president will use his authority under Congress to act is an open question but I believe that my work has brought the importance of paleontological resources into the eyes of those making those decisions. Only time will tell what the final outcome will be.