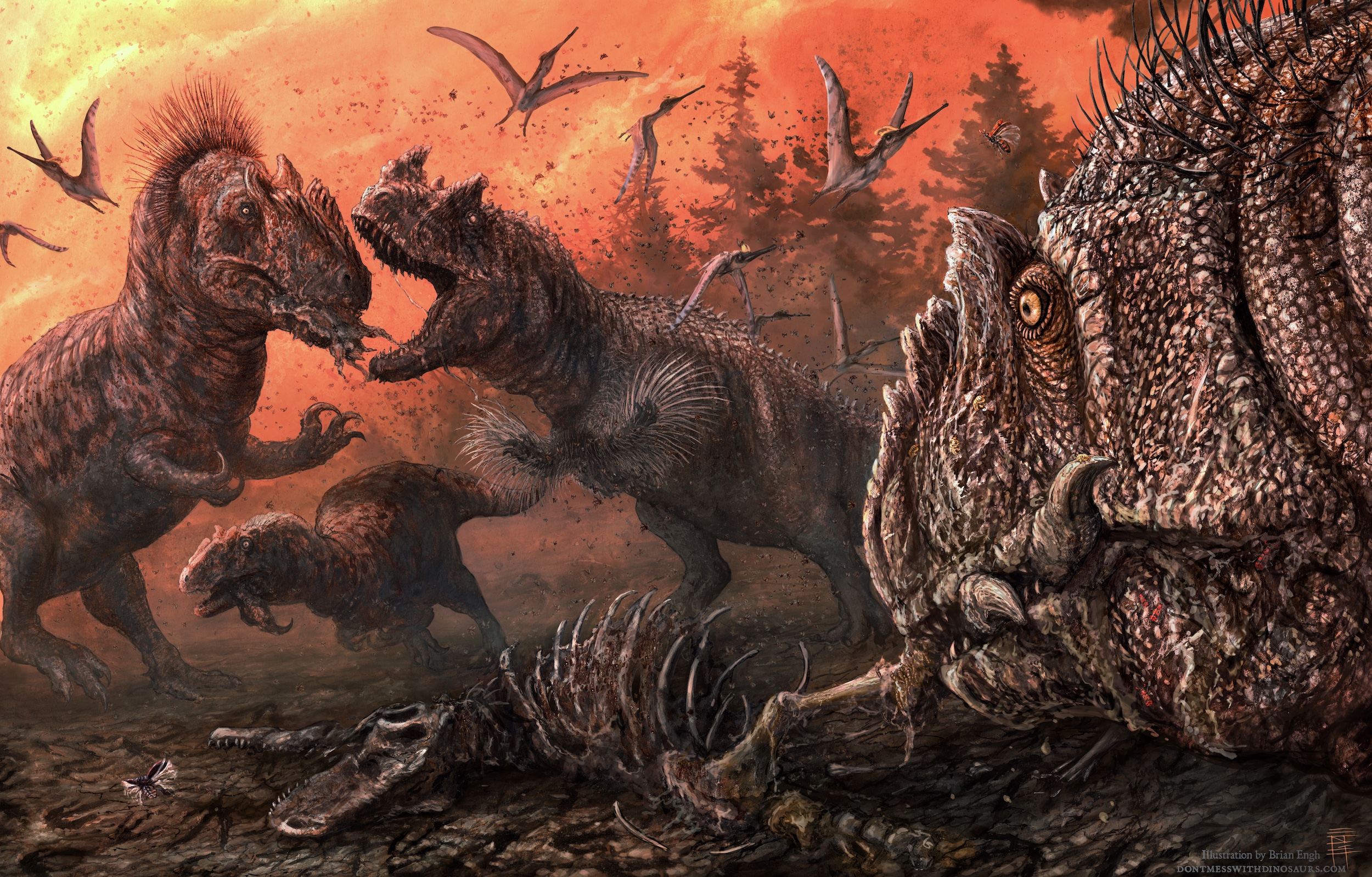 “Allosaurus Defeated” artwork of Mygatt-Moore Quarry during drought commissioned by the research team for this study. Illustration by Brian Engh, dontmesswithdinosaurs.com.

What happens after you die? Well, if you are a dinosaur from the Jurassic Period of western Colorado… it is not pretty. New research from the Mygatt-Moore Quarry in McInnis Canyons National Conservation Area has revealed a thriving ecosystem of carnivores, scavengers, and decomposers that feasted on the rotting carcasses of dead dinosaurs.

A research team led by curator of paleontology Dr. Julia McHugh from the Museums of Western Colorado, with Dr. Stephanie Drumheller of University of Tennessee–Knoxville, Dr. Domenic D’Amore of Daemen College, and Colorado Mesa University geology students Anja Riedel and Miriam Kane, set out in 2018 to document traces left on the surfaces of 152 million-year-old dinosaur bones from the Mygatt-Moore Quarry. With a generous grant from the David B. Jones Foundation, they examined more than 2,300 fossils over a two-year study and found 2,161 marks on 884 different bones, including bite marks from carnivorous dinosaurs and traces left by insects and snails. 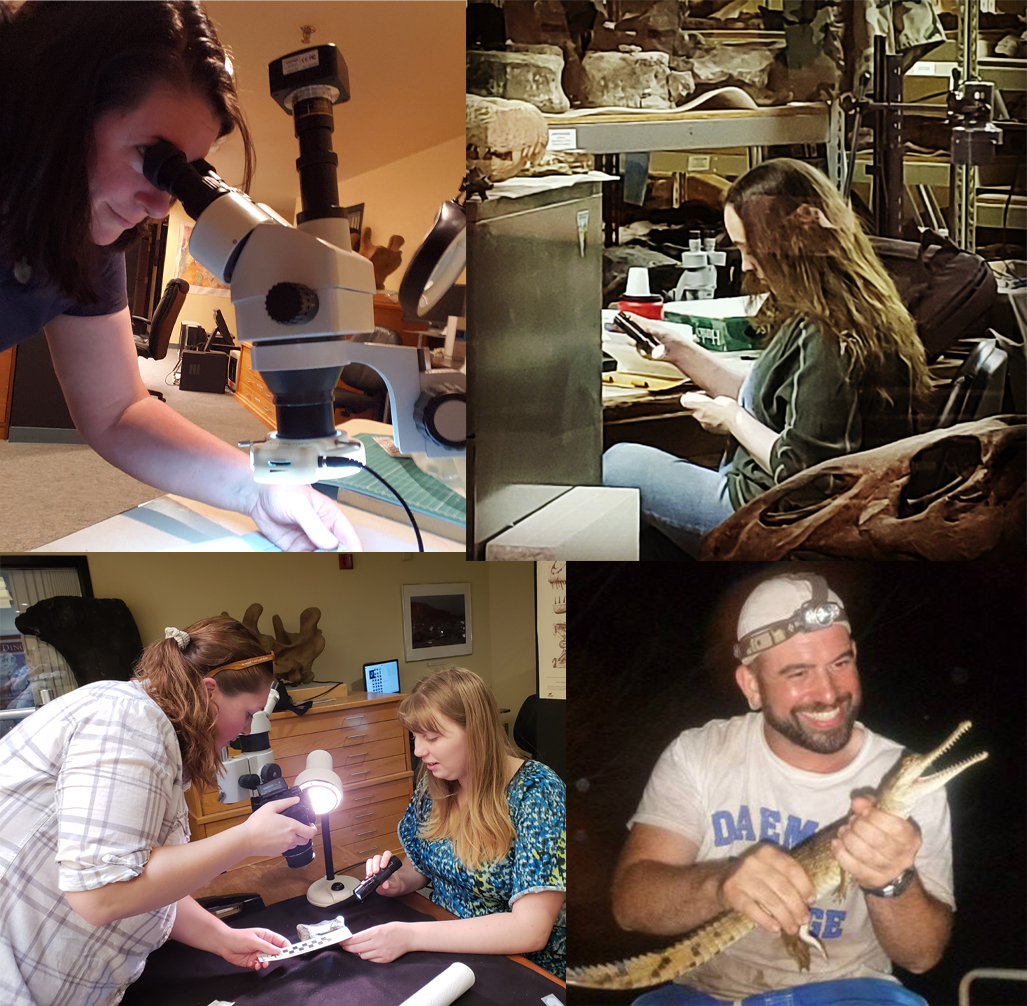 Finding marks on fossils is not new. Paleontologists have been identifying them since the 1990s at the Mygatt-Moore Quarry. Bitten bones are on display in the exhibit hall at Dinosaur Journey and you can even buy a cast replica of a bitten bone from the Mygatt-Moore Quarry from Gaston Design, Inc. Research led by former MWC curator of paleontology Dr. John Foster described several types of marks found at the site. However, a detailed analysis of the bites and other marks had not been done. This opened the door for the first ever, comprehensive survey of surface marks on bones from any Jurassic fossil site in the world. And that is exactly what Dr. McHugh had in mind when she called bite mark specialist Dr. Stephanie Drumheller.

Dr. Drumheller has spent fifteen years researching in the field of taphonomy – a branch of paleontology that examines the evidence and processes that alter fossils between the times of death and discovery. Having known Dr. Drumheller since they were graduate students at the University of Iowa, Dr. McHugh was aware of her expertise and invited her to collaborate on the project.

In early 2018, Dr. Drumheller made the trip to Colorado to examine the collections and train museum volunteers working in the quarry and lab on how to spot and identify bone surface marks on fossils. Knowing the scale of the research ahead, including physically examining every surface of every bone from a site that has produced thousands of fossils, Drs. McHugh and Drumheller knew they would need help. They hired CMU students Anja Riedel and Miriam Kane as research assistants to help go through the fossils. One by one, fossils were examined, photographed, marks were measured, and exceptional examples were scanned using the new 3D laser surface scanner purchased for the project and made into 3D models. 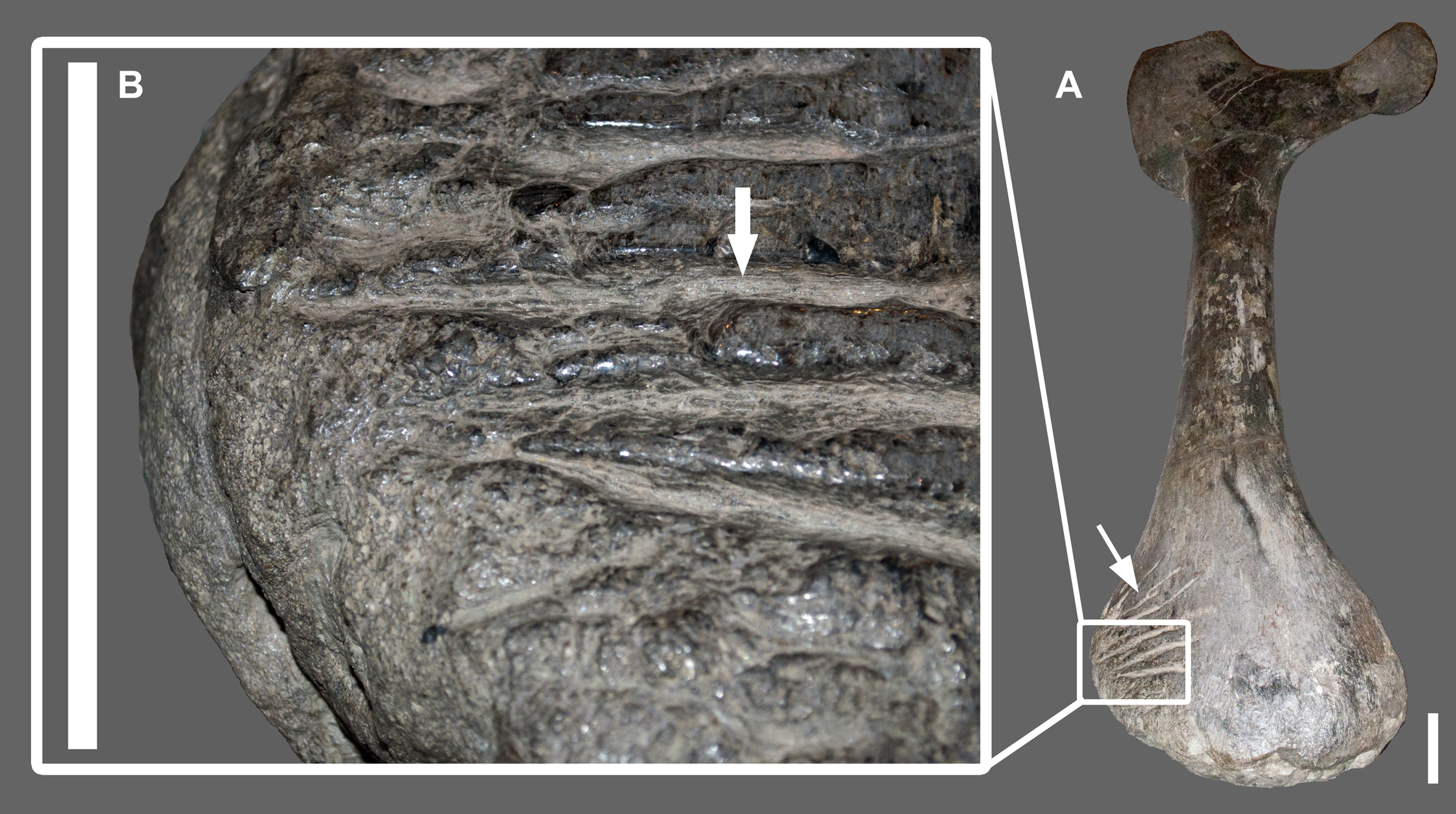 This research provides the first evidence of possible cannibalism in Allosaurus. “Scavenging, and even cannibalism, is pretty common among modern predators,” said Dr. Drumheller. “Big theropods, like Allosaurus, probably weren’t particularly picky eaters, if it meant they got a free meal.” 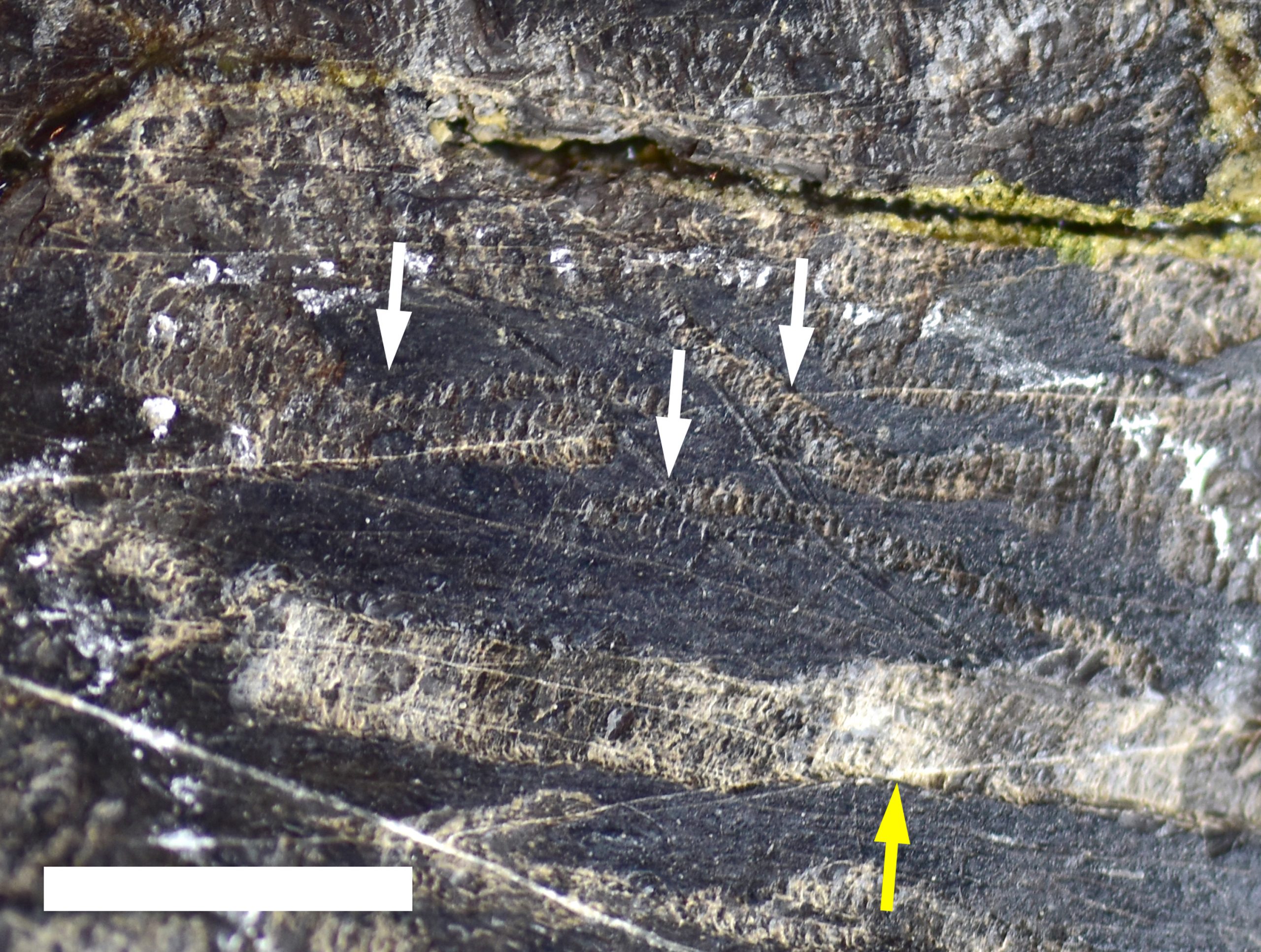 But one particular kind of bite mark, called a striation, caught Dr. Drumheller’s eye. She reached out to a colleague using these types of marks to estimate body size of the biting dinosaur – Dr. D’Amore. Running his calculations, he was able to verify three sizes of carnivorous dinosaurs at Mygatt-Moore Quarry: 1) adult-sized Allosaurus, 2) a medium-sized carnivorous dinosaur such as a juvenile-sized Allosaurus or an adult Ceratosaurus, and 3) a very large, carnivorous dinosaur, much larger than an adult Allosaurus. Both adult and juvenile Allosaurus, as well as adult Ceratosaurus fossils have been found at Mygatt-Moore Quarry, but the very large animal is a mystery. No fossils of it have been found at the quarry. Who was this mystery dinosaur? Have the fossils just not been found yet, or did the animal visit the quarry and leave without leaving any fossils? At this point, we just do not know, though fossils from other Morrison quarries may hold clues, like the large carnivorous dinosaur Saurophaganax from Oklahoma. The museum needs to keep digging to find out.

However, it was the abundance of traces that really surprised the research team. Never had they anticipated finding so many marks. Most dinosaur fossil sites will have bite marks on less than 3% of the fossils, but it was over 28% at Mygatt-Moore Quarry. Insect and snail traces are even more rare, but they are found on more than 16% of the fossils at Mygatt-Moore.

Many carrion insects feed on decaying flesh, only a few will go all the way to the bone. Six different types of traces were recorded on the bones in the study, including several sizes and shapes of feeding traces and pupation chambers. The research team was able to determine that carnivorous snails, dermestid or clerid beetles, and two unknown Jurassic insects were the most likely culprits. Of these trace makers, only fossils of gastropods have been found at the Mygatt-Moore Quarry. “Insects have never been found there, but now we know they were there, and they were abundant,” says Dr. McHugh.

But why are there so many of these traces at Mygatt-Moore Quarry, and why they are rare at other quarries of the same age? “These types of site-wide surveys are pretty uncommon in dinosaur-dominated assemblages,” says Dr. Drumheller. “It’s possible that if we start really digging into other museum collections, we’ll find even more evidence of damage.”

The abundance of traces meant that the dinosaur carcasses were sitting on the surface for a long time – 5 months to 6 years or longer according to the new research. “Large carcasses take a long time to decompose. The smell from a dead mouse in your basement is bad enough, but then imagine that mouse was a 65-foot long animal! The stench of rotting meat would have been a magnet for carrion insects and other scavengers,” Dr. McHugh explains. “152 million years ago, Mygatt-Moore Quarry really was the ‘Bog of Eternal Stench’.”