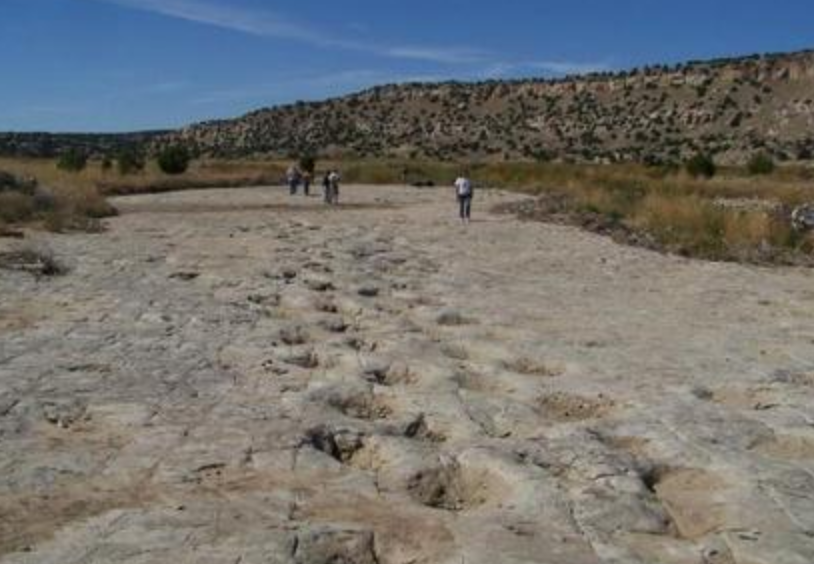 There are a lot of animals that eat plants. Think about the vast herds of wildebeest, antelope, and zebra migrating across the Serengeti, or dense herds of elk during the rut here in Colorado, or even the vast herds of bison that once covered huge swaths of North America. That’s a lot of mouths to feed. Good thing plants are everywhere! Even a single horse can eat three to four tons of hay per year. And while a horse may seem large to you and me, it is dwarfed by the giants of the Jurassic Period. Sauropod dinosaurs, like Diplodocus, Brachiosaurus, and Apatosaurus could reach lengths of 60-70 feet long, versus an eight-foot-long horse. These were some of the largest herbivores to ever walk the Earth.

Just like today, plant-eating dinosaurs formed herds. In fact, some of the first evidence for herding behavior in sauropod dinosaurs, the giant plant-eaters of the Jurassic Period, was uncovered in eastern Colorado. In the Purgatoire River Valley near La Junta is a vast Jurassic-age track site with hundreds of dinosaur footprints, including sauropod dinosaurs. There are long trackways moving in the same direction, side-by-side (Lockley et al., 1986). These impressive tracks show that these behemoths were not isolated on the landscape. They traveled in groups, possibly covering vast distances in search of water and fresh vegetation.

But it was not a single herd, or even a single species, feeding on plants 150 million years ago. It was many. In a single geologic unit, the Morrison Formation, there are many different sauropod dinosaurs. Here in the Grand Valley, we find fossils of Apatosaurus, Camarasaurus, Diplodocus, and Brachiosaurus in the Morrison Formation. It may seem impossible that so many large plant-eaters could have lived together with enough food to eat, but just like today, not all plant-eaters ate the same plants. By feeding on different types of vegetation, partitioning the resources in their shared ecosystem, herbivores can ensure that there is enough food to sustain their herds. 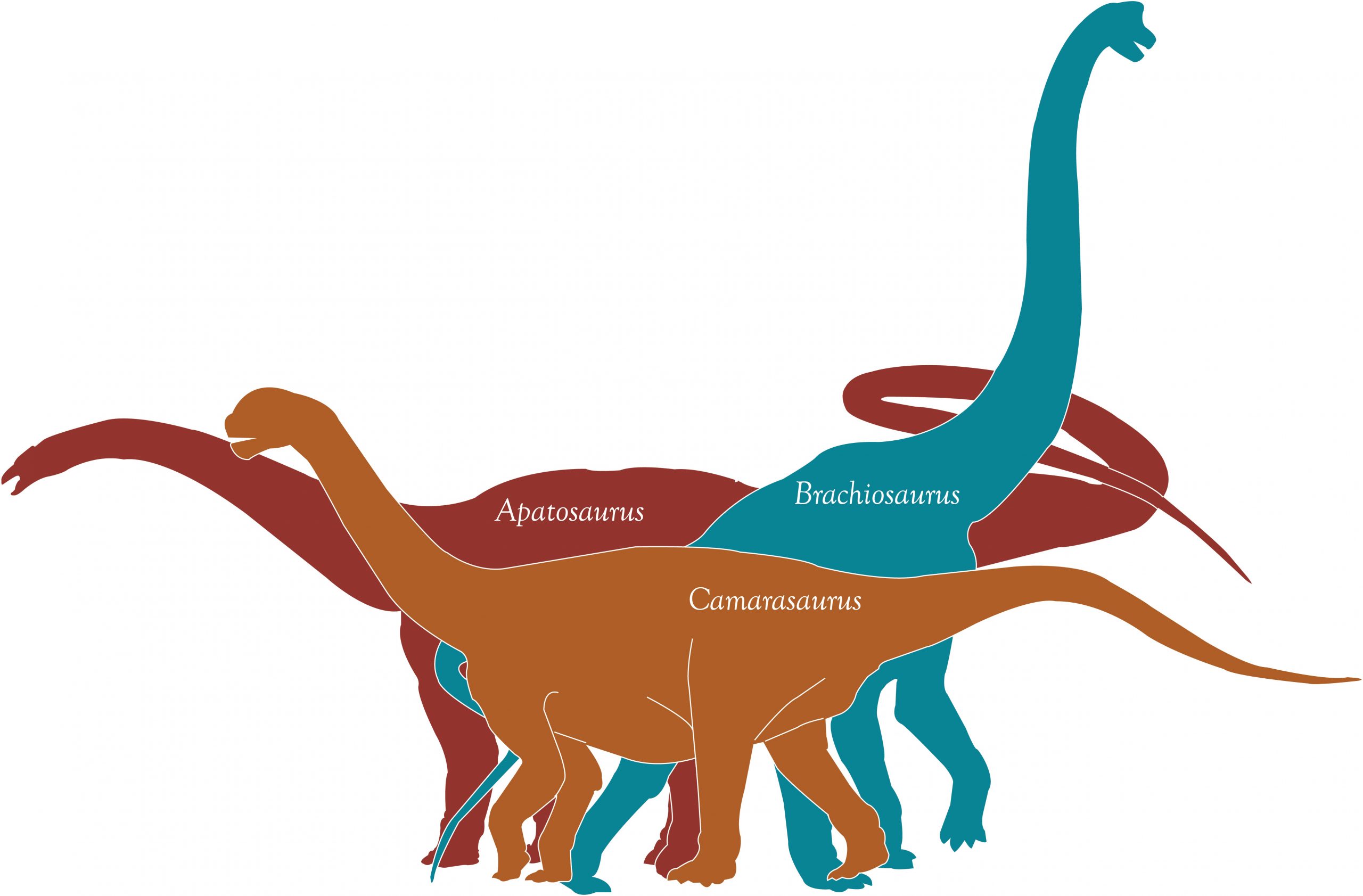 Animals like Camarasaurus and Brachiosaurus, with their strong necks held more erect, were able to feed much higher in the tree canopy than either Diplodocus or Apatosaurus. Brachiosaurus being much taller would have had its pick of the top of the canopy. Their teeth are also shaped differently. Dinosaurs, like other reptiles, replaced their teeth frequently throughout their lives. For each tooth in the toothrow, inside the jaw were teeth waiting for their turn to erupt and take over the duty of processing food. Camarasaurus and Brachiosaurus have large, scoop-shaped teeth, while Diplodocus and Apatosaurus have thin, peg-like teeth. Modern herbivores often show differences in tooth shape when they prefer to feed on different types of vegetation. Tooth shape and neck orientation are two key pieces of evidence that support ecosystem partitioning among these animals.

But what about Diplodocus and Apatosaurus? These animals are found in the same areas, sometimes in the same fossil quarries, and had very similar tooth shapes and body silhouettes, with horizontally held necks that were able to sweep a wide, low area effortlessly. How can we determine if they were also partitioning plant resources among themselves? For that, we must turn to the fossils themselves, specifically, those jaw bones with the teeth inside of them. 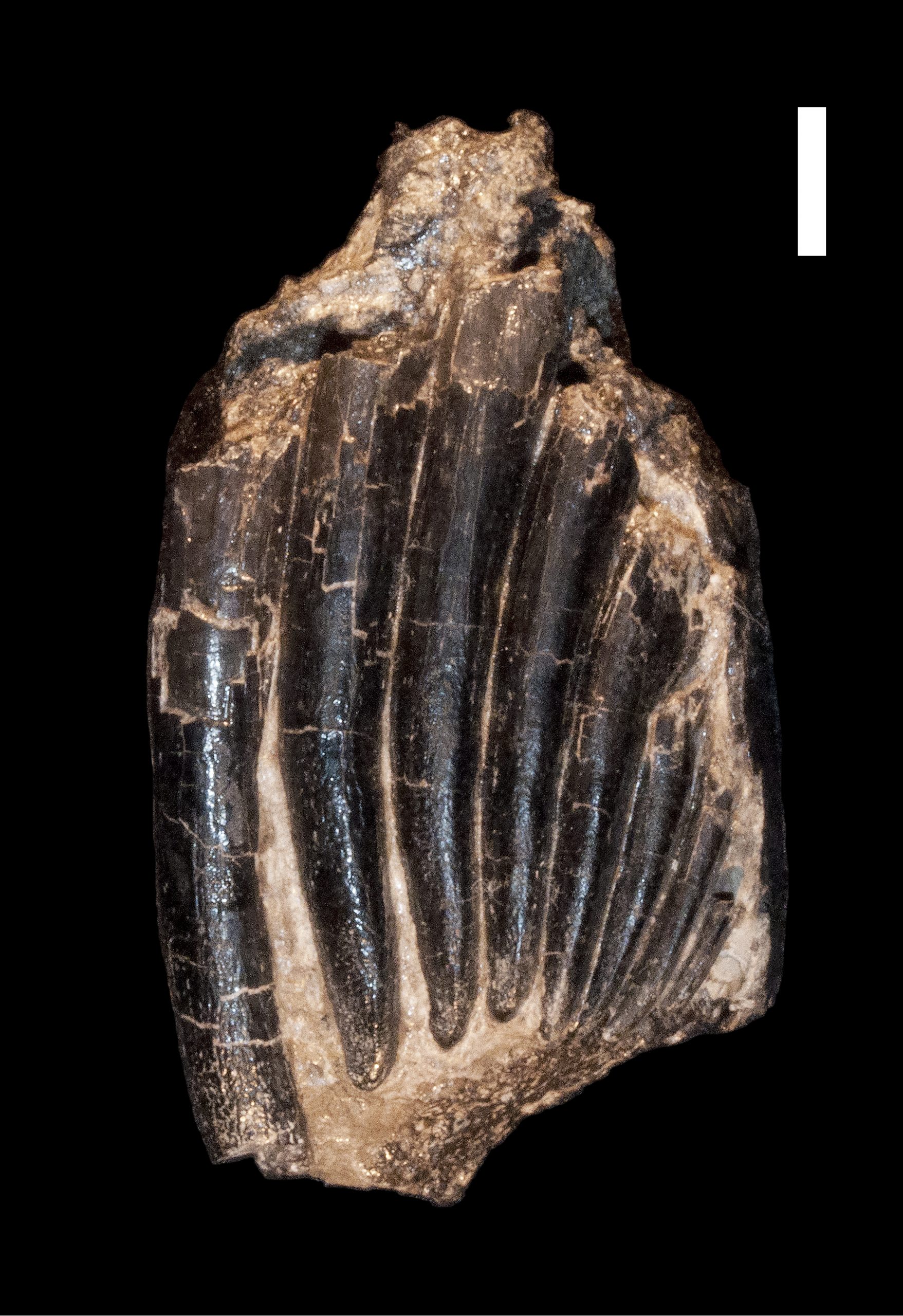 Photo of MWC 8430, a premaxilla fragment, showing the peg-like replacement teeth in a row behind the erupted (and broken) tooth. Scale bar equals 1 cm. Credit: “Courtesy of the Museums of Western Colorado”.

In 2018, Museums of Western Colorado Curator of Paleontology Dr. Julia McHugh published descriptions of two isolated jaw fragments discovered at the Mygatt-Moore Quarry in the McInnis Canyons National Conservation Area in the journal Geology of the Intermountain West. Although incomplete, these fragments have been referred to the genus Apatosaurus, the most common dinosaur found in the Mygatt-Moore Quarry. Working with Dr. Michael Neste at Colorado Canyons Hospital & Medical Center in Fruita, they were able to CT scan the two jaw fragments and see the unerupted teeth still inside them. What was inside those jaws was the clue Dr. McHugh was looking for to answer the question. There were a large number of teeth waiting in a line to replace the tooth in the mouth. The most replacement teeth were found at the very front of the mouth and there were seven teeth inside the jaws waiting to replace the erupted tooth, making a total of eight teeth. That is a lot. And suggests that teeth were being shed in the mouth quite regularly. 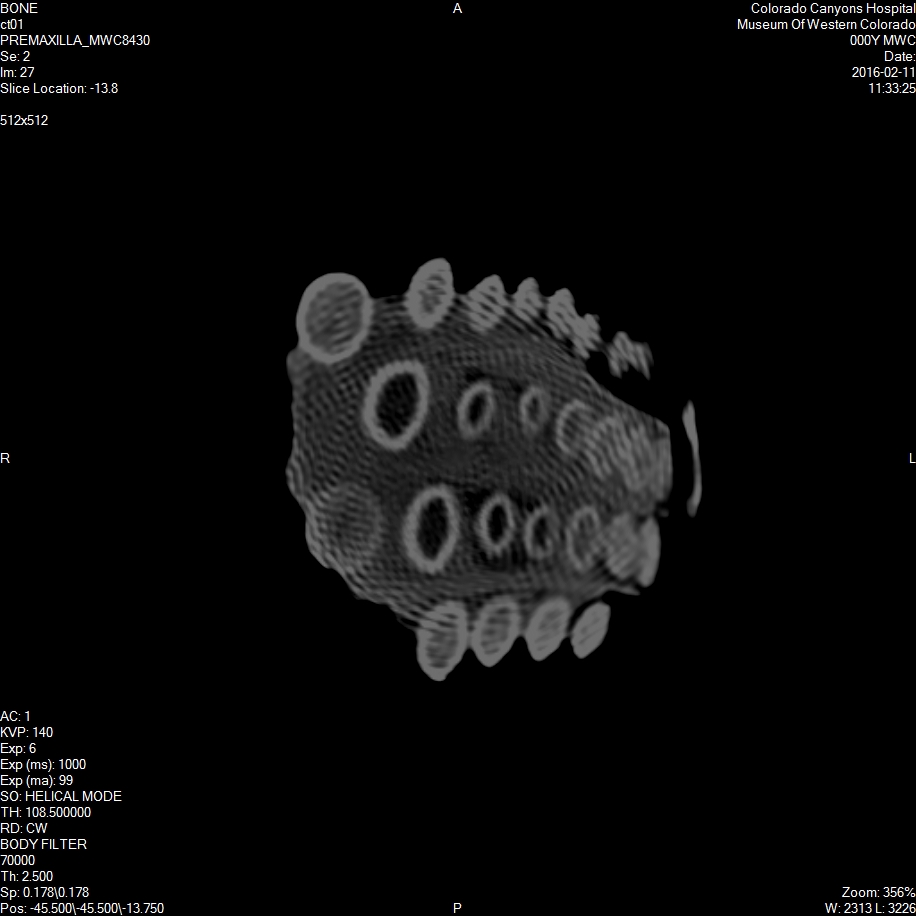 CT scan of MWC 8430 from the top, showing replacement teeth for four tooth positions in the jaw. Credit: “Courtesy of the Museums of Western Colorado”.

Another study by Dr. Michael D’Emic of Adelphi University and his colleagues in 2013 determined a lower tooth count in the jaws of Diplodocus, with a maximum of only six teeth (five replacement teeth and an erupted tooth). Despite similarities in neck orientation and tooth shape, Diplodocus and Apatosaurus had different numbers of replacement teeth, with Apatosaurus stockpiling more teeth inside the jaw, having them ready for quick replacement when the functional, erupted tooth was shed. This suggests that there was more tooth shedding and tooth replacement happening in Apatosaurus, likely due to a diet of tougher vegetation, like cycads and conifers, than Diplodocus, which may have preferred softer plants like ferns. The fossils from the Mygatt-Moore Quarry have given paleontologists the first solid evidence for resource partitioning between Apatosaurus and Diplodocus, solving the mystery of how these two gigantic and so similar animals were able to coexist and thrive in the same environments 150 million years ago.