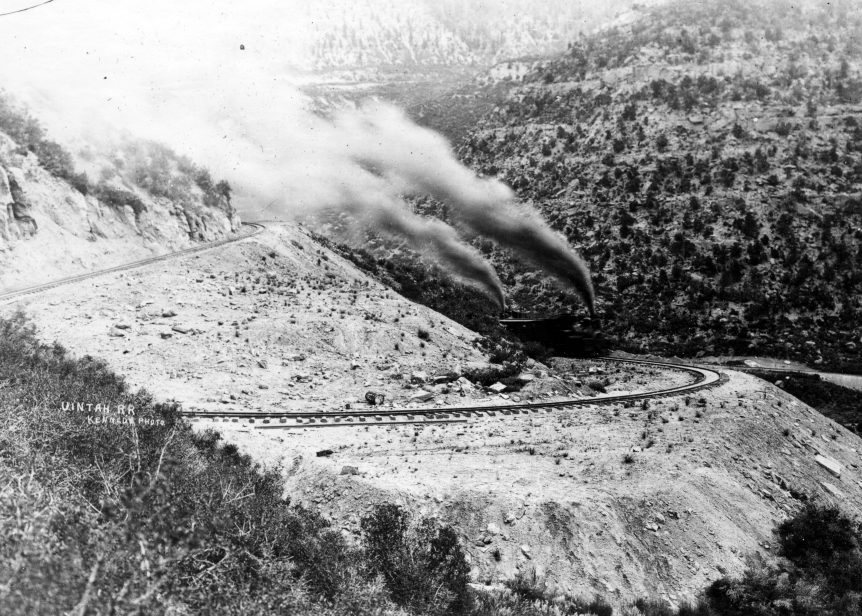 Listen to a segment of KAFM’s community affairs hour where Kaia Michaelis and Libbie Early interview Matt Darling about this find:

This spring at Cross Orchards Historic Site during our annual spring cleaning up we made an amazing discovery. While sorting thru some old junk Railroad lumber, we found a mostly intact narrow gauge railroad tie, complete with two spikes still in it. Where did it come from, when did it come to the museum, whose tie is it? Sadly, we have no notes or documentation of any kind about the tie.  A best guess is someone was exploring the old right of way of one of the local railroads, found the tie and brought it to Cross, where it was added to the stockpile of old lumber we have.

A railroad cross tie is a heavy rectangular wood board laid under the rails supporting them and holding them in the proper width with large nails called spikes.  Ties are spaced about 18 inches apart. Standard gauge ties are 7ft long while narrow gauge ties are 5ft long. Modern ties are made out of concrete with bolted clamps holding the rails in place.

The spacing between the spikes was measured and they were 3ft thus confirming the tie is indeed narrow gauge. The sides of the tie were another delineator that the tie was old. Newer (post 1900) railroad ties are cut off fully square. The old tie had rounded sides.

Whose tie is it?

With the tie confirmed as a narrow gauge one the next question is whose tie is it? The condition of the tie is helpful but far from conclusive. The Tie is weather beaten but only partially rotten and mostly on the underside. This indicates that the tie is probably local. Since a tie from a wetter climate would be more rotten. The three local possibilities are, the Little Bookcliff Railway completed in 1893, the Uintah Railway completed in 1904 or the Denver & Rio Grande Western built completed in 1883. 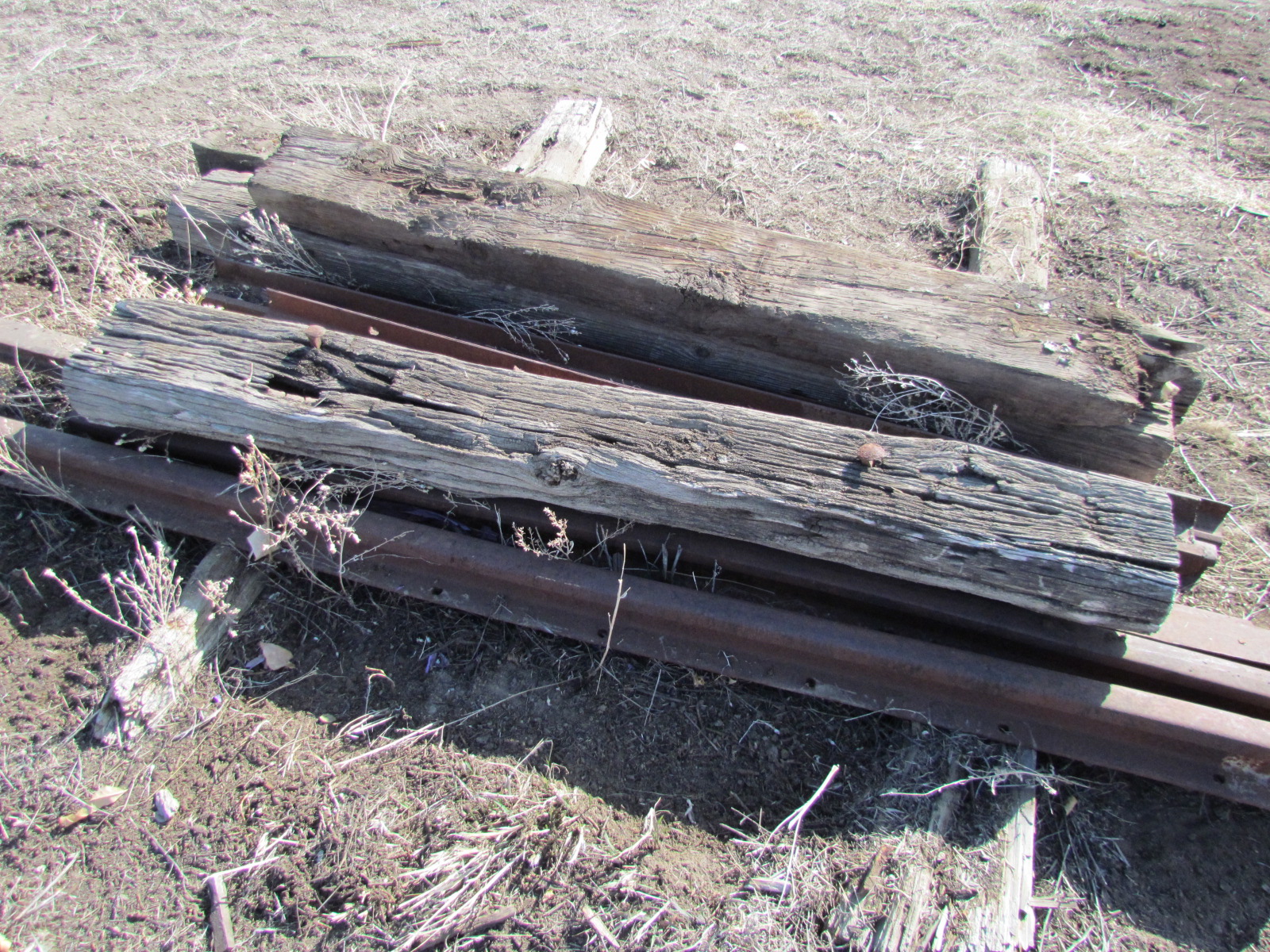 Let us start with the Little Bookcliff railway. The LBC was a short line that ran from downtown Grand Junction to the coal mining town of Carpenter at the base of the Book Cliffs. Sadly, the LBC is not a good contender. The LBC was only 12 miles long and scraped in 1923. When the LBC was scraped the proximity to GJ meant any item left over from the scrapping would be easily found by the towns people of GJ and reused. The fact that the LBC was only 12 miles long is also a factor. On average there are around 3,200 ties per mile on a railroad, so a fair estimate is that the LBC had around 28,400 ties. That means there are only 28,400 chances of a tie being set aside misplaced and some other scenario that would allow the tie to be saved.

The next contender is the Uintah Railway. The Uintah ran from Mack, CO to Watson, UT with several branch lines at Watson. With over 60 miles of track that would give the Uintah over 192,000 ties. However, this number is not a correct estimate, because of a quirk of the Uintah Railway. Over the 35 years of operation the prospects of converting the Uintah to Standard Gauge was brought up several times. In fact, in 1918 the owner of the Colorado Midland Albert Carlton was in talks to buy the Uintah for the Midland to use.  All these plans kept leading to the Uintah buying standard gauge length ties to be used under the rails. Many photos of the Uintah show a mismatch of tie sizes on the line. With this quirt of history in mind coming up with a fair estimate on the number of ties is difficult at best. But for arguments sake let us use the aforementioned number of 192,000 ties with about 40 percent of them SG for a final number of 11,520, these 11,520 chances of the ties being from the Uintah. Another factor to consider is when the Uintah Railway was scraped the line was turned into county roads used by local ranchers. Some photos of Uintah ties show the style our tie has but with the aforementioned factors to consider the odds of our tie being Uintah are not good.

The last contender is the Denver & Rio Grande Western narrow gauge main line built in 1883 and replaced in 1890. The D&RGW was the Utah extension of the Denver & Rio Grande of Colorado.  The D&RGW line stretched the length of Utah from Grand Junction to Ogden, UT. The line was damaged several times by flash flooding first in the spring of 1884 and again later that summer and then again in 1886. By 1887 a change in management and the growing competition from Standard gauge railroads made the D&RGW change its name and its gauge. Over the next two years the now called Rio Grande Western, converted its entire system to Standard gauge. During this reconfiguration they also realigned the route for faster better drier operations. A great many curves and grades were eliminated especially in a 50-mile section west of what would later become Mack, CO. The new alignment was routed thru Ruby canyon using a tunnel just west of Mack. When the new SG line was complete the old NG line was taken apart, with the pieces to be reused elsewhere. The 50-mile section west of Mack ran out in the remote area north of where I-70 now runs.  A few portions of the route were reused, by either the Uintah Railway or later the county run road system called the Midland Trail. To save money Grand County UT used several miles in the area. Most importantly just north of Cisco, UT a roughly one-mile-long section of the old grade never had its ties removed for reasons lost to history. Photos as late as the 1980s show sun baked railroad ties still sitting on the ground.  The number of ties used on the old NG line to Ogden is well over 1,066,000. The line west of Mack alone is well over 160,000. With so many miles of abandoned grade and the sheer number of possible ties, considering the remoteness of the abandoned grade, and the quirk of the ties near Cisco we feel the chances of our tie being from the D&RGW NG are pretty good. 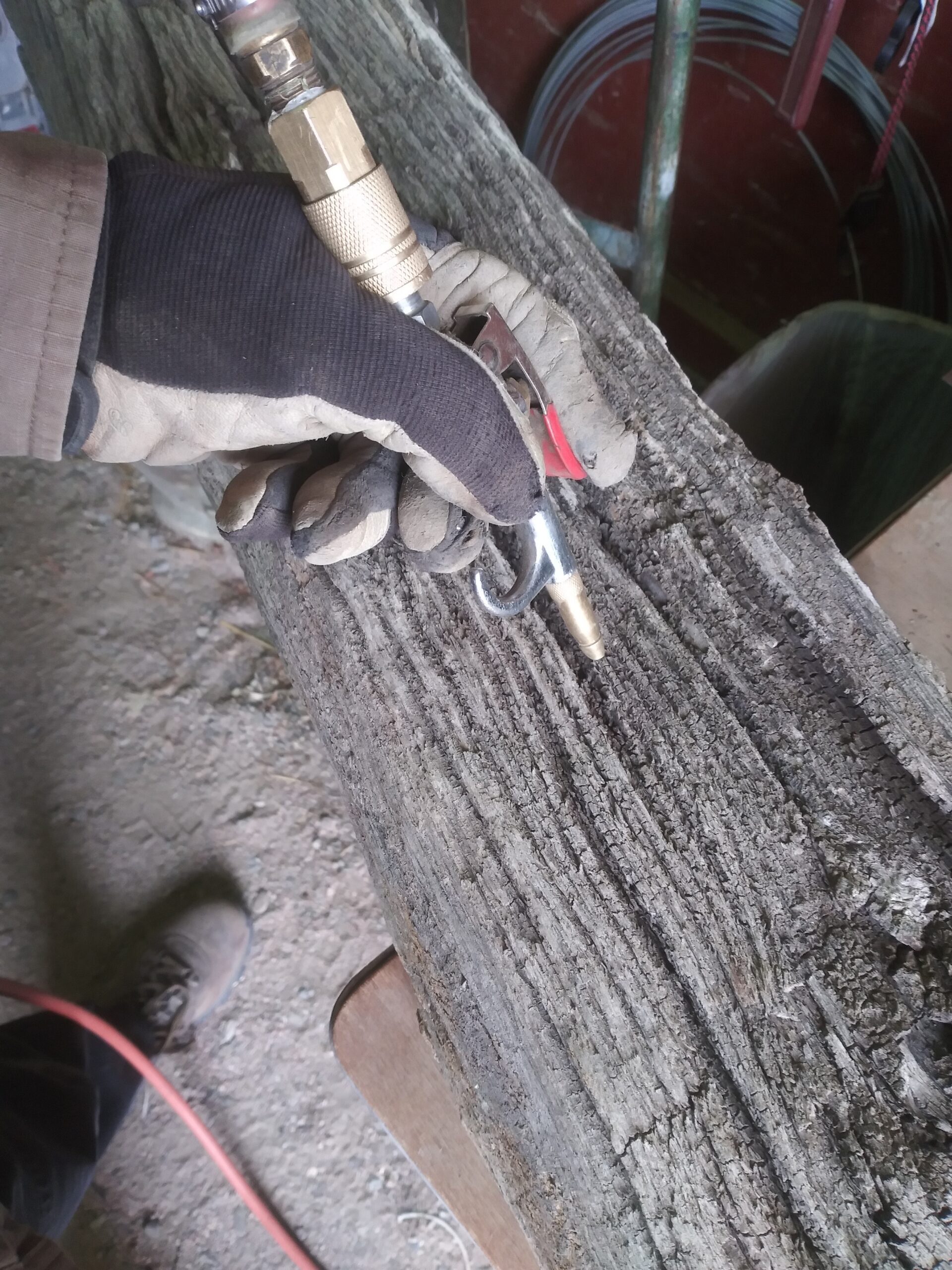 When an artifact that is not accessioned has been located in the collection it is assigned a FIC number (Found in Collection). With our tie we have assigned it an FIC number and started taking steps to protect the old tie. The first step was simple, move the tie inside, out of the elements. Keeping wood dry and away from the sun is the best way to preserve it.  We then removed any dirt of other loose particles on the tie using an air nozzle. We were careful to not over do it because the air nozzle could also damage the old wood if too much force was used. After cleaning we now have the option of applying a coating of Boiled Linseed oil to further preserve it.

We hope to have the old railroad tie on display in the Orchard View Room at Cross Orchards soon for people to enjoy a small piece of Western Colorado history.