We lost a great friend of the Museum recently. Ann Buelow was a friend to many and a loyal volunteer. Before her tenure at the museum, she was an army nurse stationed at a MASH unit in Vietnam. In the 1990s, she took on a volunteer position at what was then Dinosaur Valley in downtown Grand Junction. But that wasn’t enough to keep her busy. She soon took on volunteer roles at each of our museum sites.

At Cross Orchards Historic Site, she was a docent and she worked with the children’s camps in the summer leading games and crafts. She made costumes for volunteers and helped research the history of Cross Orchards. She will forever be fondly remembered for her role as Apple Annie, where she would dress up as a huge apple, complete with worm, for festival days. 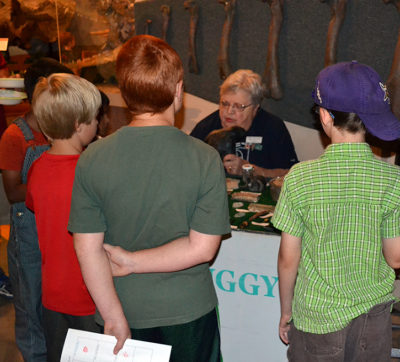 At Dinosaur Valley and then Dinosaur Journey, she did school outreach and guided tours. She started our casting program and was our main caster for 15 years. She was also the mastermind behind the bone cart, bringing specimens to the public. She once again proudly dressed up, taking on the role of Mrs. Claus during Breakfast with Santa.

Ann was an active volunteer in most of our early programs and events. She was always willing to take on a new challenge and come up with new ways to involve the public in her passions. She made many dear friends during her tenure at the Museum and her hard work will not be forgotten.

We would like to invite you to a memorial service in her honor to be held at noon on May 16 at Dinosaur Journey. Please bring photos and memories to share. The Grand Valley Combined Honor Guard will be providing a service at 1:00 pm on April 2 at the Veteran’s Memorial Cemetery that will recognize Ann, along with others who have served and passed.