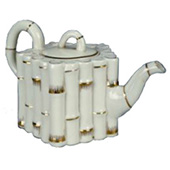 The 1880s was a decade of beginnings. Planners and visionaries in 1881 saw the promise in this broad valley. The arid Grand Valley was a desert, but it was traversed by two major rivers. Water from the Grand River ( later renamed the Colorado ) was soon brought to town and farms, via dams, canals and ditches. The first of many canals were the Pioneer Canal, and the Pacific Slope Ditch in 1882. Grand Junction was incorporated in 1882, and by 1883 Mesa County was established with Grand Junction as the county seat. The town’s population in 1885 was 378, according to a special Colorado State Census, but other sources claimed it was over 800.

Image: Benton and Evelyn Canon settled in Grand Junction in 1887. This bamboo pattern Belleek teapot, a fine porcelain from Ireland, was a wedding present that traveled with them.

George A. Crawford (1827-1891) headed the Town Company and is considered “the father of Grand Junction.” A skilled entrepreneur, he also founded three cities in Kansas, and Delta, Colorado. Elected governor of Kansas in 1861 in an election invalidated on technicalities, he did not serve. However, he usually was known as “Governor” Crawford. (F. Gutekunst Photo)

Grand Mesa provided recreation from the earliest days. Scenic beauty, and abundant fishing and hunting were appreciated by the settlers. Summer homes and resorts began to be built, usually near cool lakes. Glade Park also was a summer favorite. Winter sports were sledding and skating. Skiing came later.

On Sept. 26, 1881 the Grand Junction town site was selected, and stockholders then established the Grand Junction Town and Improvement Company. They owned the land, and were distinct from the town government. They surveyed streets and lots, promoted sales of the land they owned, and encouraged settlement. The town occupied a square mile, spanning from 1st to 12th Streets, and from North to South Avenues. The plat shows the layout of the town.
(Photograph and attached digital image, Mesa County Clerk and Recorder’s Office)

The first structure in town in 1881 was the Town Company office. A log cabin at 2nd and Ute, it was built from cottonwood trees growing near the river. The residents were Mr. and Mrs. R. D. Mobley. R. D. Mobley was the first postmaster. 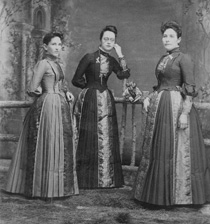 Literary societies, churches, lodges, bands and orchestras, and plays and musicals soon flourished. The frontier town began to be polished. Schools were a major factor as music, art and drama were taught in addition to the three R’s. Here is a trio of teachers, ambassadors of culture, in fashionable attire.

Schooling for the children was an early priority. Nannie Blaine Underhill was the first teacher. The first school, a crude cabin of upright logs, soon was replaced by a better building of local brick. Teacher Isa Caldwell is in the doorway. She began teaching in 1882 and taught all grades in the one room school. (W. H. Jackson & Co. Photo)

The Denver and Rio Grande Railroad reached town in November, 1882 and it was a major boost to the success of Grand Junction. Trains were of paramount importance in the era before automobiles, trucks and airplanes. Grand Junction became a major division point of the railroad, with repair and maintenance shops. 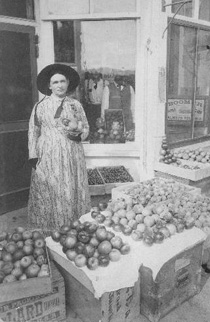 Kate Harlow and her husband, John Petal Harlow, had one of the first farms on Rapid Creek. They experimented with a wide range of grains, vegetables and fruit, and nearly everything grew well. Kate had an early restaurant and fruit stand on Grand Junction’s Main Street.

First held in 1887, the Mesa County fairs were initially held at 7th and Patterson, then at Lincoln Park. Over the next two decades some of these annual celebrations were tailored into “Peach Day” festivals, focusing on one of the county’s most delectable and sought-after products. President William H. Taft visited the fair on his way to Montrose in 1909 to dedicate the Gunnison Irrigation Tunnel.

By the 1890s the main elements of the economy were in place. Agriculture, commerce and transportation continue to this day. Grand Junction’s population in 1890 was 2,030, according to the Federal Census Bureau.

Many varieties of fruit soon became prime crops. The Grand Valley has a long growing season, warm days and cool nights, and irrigation which allows water to be applied exactly as needed. These factors all contribute to growing fruit of extraordinary quality. This scale was owned by John Hines, an orchard owner who was one of the area’s first black residents.

The Park Opera House was at 430 Ute Avenue, facing Cottonwood Park – later Whitman Park. (The site is now the Museum of the West parking lot.) Equipped for theatrical events, lectures and music of all types, it featured local and touring companies. Performers from the Barrymores to the Four Cohans appeared there. The Opera House was in use from the 1890s until the 1920s when moving pictures changed theatrical demands.