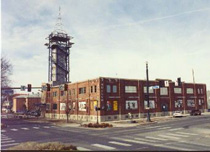 The Museum of Western Colorado, founded in 1965, opened a new History Museum and main office in May 2000. The building is the former headquarters of the C.D. Smith Company. A solidly built brick structure dating from 1936, it was remodeled with exhibit galleries and the Loyd Files Research Library. The Sterling T. Smith Tower offers vistas over the city and valley. The Museum also includes Cross Orchards Historic Farm, Dinosaur Journey (Fruita) and the Whitman Education Center.

Mesa County courts built a new Justice Center which was inaugurated in 2001. It is at West Main and Spruce Streets, and is connected to the City/County Jail and Sheriff’s Department by a secure tunnel. Transportation of detainees to court hearings by armed vans had been complicated. Detention and courts now are conveniently close. (John Hedrick Photo)