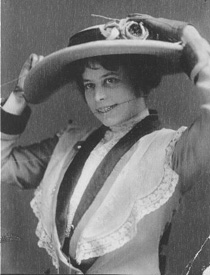 In 1911, the elegant Grace Miller posed in fashionable clothes. She and a partner operated The Ladies Tailoring College. Grace secured her hat with a long hat pin, and a second pin was held ready between her teeth. A breeze could send a large hat flying away, and pins through the hairdo and hat kept the hat in place. 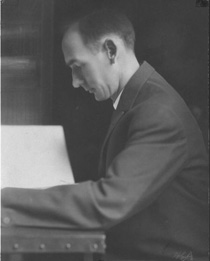 Richard E. Tope was a school administrator. “Professor Tope” was admired as a cultivated gentleman of wide learning who recruited an outstanding staff of teachers, and set a standard of excellence. Mr. Tope was principal of the high school 1911-1918, and then superintendent of schools until 1938. On retirement he was appointed superintendent emeritus and consultant. 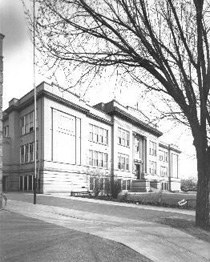 A larger high school building was needed, and the 900 block between Chipeta and Gunnison Avenues was bought for the new location. The central section was built in 1911, and wings on each side were added beginning in 1917. There were 36 rooms and an auditorium for 500. The small number of students in 1891 had grown to over 600 by the 1910s.
(Dean Studio Photo) 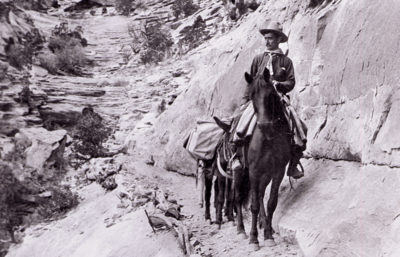 Spectacular red sandstone cliffs and canyons are to the west of Grand Junction. John Otto, pictured on horseback, was an environmentalist and visionary. He was determined that this scenic domain should be saved intact as a natural park. This dream was realized in 1911 when the Colorado National Monument was established. Otto, the first park superintendent, developed many hiking and horse trails including the twisting Serpent’s Trail Road, now used for hiking.
(Colorado National Monument Photo)

Especially in the west, roads between cities were primitive. Nonetheless, in October 1912 a hardy band of 27 motorists drove nine cars from Grand Junction to Salt Lake City. The road often dwindled to a wagon track, streams were forded, and deep mud was a problem. They made the journey in 11 days, and Salt Lake greeted the pioneers with a banquet. The drivers shipped their cars home by railroad. (Winfield Photo) 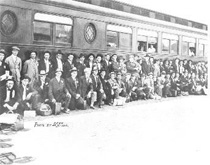 World War I was a world-wide conflict during 1914-1918, and the United States was a combatant 1917-1918. Naval forces were engaged on the Atlantic, and land forces were mainly in battles in France. These Mesa County recruits, ready to leave for military service, boarded a car on the Midland Railroad which served Grand Junction from 1890 to 1918. (Dean Photo, The Daily Sentinel)

One of the largest irrigation projects in the nation, the Highline Project was completed in 1918. It provided the water to cultivate 50,000 acres in the Grand Valley. The unusual roller dam is shown as it was being built across the Colorado River in DeBeque Canyon. The level of the reservoir behind it is controlled by raising or lowering large steel cylinders, called rollers. There are only three roller dams in the country, and this is the largest.  (U. S. Bureau of Reclamation Photo) 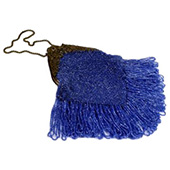 The 1920s were called “The Roaring Twenties” nationally. But in Grand Junction these years were calm and progressive. There was much construction, including a fine new courthouse, the Avalon Theatre, and many schools. The council and city manager form of administration dates from 1922. The population reached 8,665 by 1920, for an increase of 11.7 percent between 1910-1920.

An accessory from the 1920s is this woman’s purse in royal blue beadwork. The frame and clasp are filigree metal. The small size of the purse is appropriate for downsized clothes. Women’s fashions became less confining in the mid 1920s as hemlines rose to the knees, and sleeves could be short. Women’s figures were expected to conform to the new slim look.

The vast orchards in the Grand Valley needed chemical sprays to control insects. General agriculture also used sprays for weeds and insects. The Latimer-Goodwin Chemical Company manufactured and distributed sprays and fertilizers, and had a branch in the fruit growing areas of the state of Washington. They also made cider from apples, and fermented vinegar. (Dean Studio Photo)

Suffragettes were the feminists of their time. They campaigned for the right of women to vote, and the 19th Amendment of the Constitution gave them the vote nationally, beginning with the 1920 election. Women had voted in Colorado since 1893 because state law assured them that right, but local women were elated that the privilege now was policy in all the states. 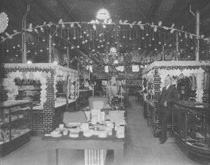 William J. Moyer, shown near a Christmas display in the Fair Store, became the leading citizen of Grand Junction. The Fair Store opened in 1890 and was the largest department store in Western Colorado. His other major investments included the Grand Valley National Bank. Mr. and Mrs. Moyer were generous with their wealth. They financed young people through college and donated the city’s first public swimming pool, the Moyer Natatorium, in 1922. Unfortunately, the Great Depression of the 1930s brought financial ruin to the Moyer enterprises.