The entire town was enthused about the 1936 Grand Junction High School Tigers football team. They made widespread sports news as they played an entire season without being scored upon. The toughest game was in Salida. A special train carried fans to the meet which the Tigers won, breaking Salida’s winning streak of 39 games. The 1936 season total was Tigers 506 to 0 for their opponents. Rah Rah Tigers! (1937 Grand Junction High School Annual)

The City Market chain was started by the Prinster brothers with one small grocery store in Grand Junction in the 1920s. Grocery stores typically were not large. Supermarkets with wide selections and lower prices were an idea of the 1930s. City Market opened the first of their many supermarkets at 4th and Rood in 1939. (City Market Photo) 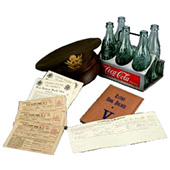 World War II engulfed the nation from 1941 to 1945. Grand Junction contributed to the new Atomic Age which ended the war. Afterward, the city continued as a part of the national atomic energy complex. The 1940 population was 12,479, a 21.8 percent increase through the 1930s, despite the Depression

World War II brought shortages of many commodities, and the government issued ration books to citizens. Coupons entitled customers to buy allotted amounts of goods like canned food, meat, butter, shoes and gasoline. Coca-Cola was not rationed. It was available in its curvaceous glass bottles, not in cans. Military uniforms were well tailored of durable fabrics, and included headgear.

This is an Army hat, and soldiers were obliged to wear a “cover.” 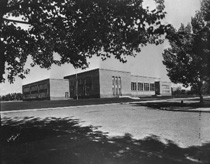 Mesa College was ready for relocation, and 1940 saw the opening of the first building on a new campus at 12th and North. The building incorporated classrooms, auditorium/ gymnasium, administration and library. It now is named Houston Hall for Clifford Houston who was third head of the college, from 1932-1937. It has been remodeled, but the appearance is much the same. (Dean Studio Photo, Mesa State Archives, Tomlinson Library, Mesa State College)

The La Court Hotel at 2nd and Main Streets was operated by the Buthorn family for two generations. The lobbies were handsome, the dining room was noted for its cuisine, and the Green Room hosted service clubs and banquets. During the 1940s and 1950s their steak house, known as The Tavern, was a main center for uranium developers and investors to meet and strike deals. 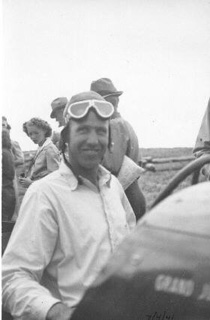 On the west side of Grand Mesa, the Lands End Road is a challenging climb. A long steep grade, it has multiple curves and sharp turns. It was the site of car races on the Fourth of July, 1940 and 1941, and then again in later years. Louis Unser, winner of many Pikes Peak Hill Climbs, declared Lands End was the most difficult course in the nation. Among the 16 racers in 1941, there were two French drivers who imported their Talbot cars. Bob Baughman was one of the local contestants, shown with the racer he built. (Photo courtesy James Baughman)

World War II put the entire national economy into high gear, and agricultural production and prices were boosted out of the Depression doldrums. Mesa County fruit, livestock and field crop production flourished. Canning factories, like the large Kuner-Empson facility, operated at full capacity. It was located on South Eighth Street near the railroad. 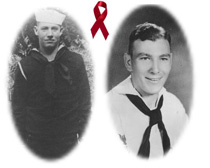 The attack on America at Pearl Harbor, December 7, 1941, plunged the nation into World War II. Mesa County’s James Massey and Harold Wood were among the fatalities on that first day. Many hundreds of our Grand Junction men and women were soon in all the military branches, serving around the world. 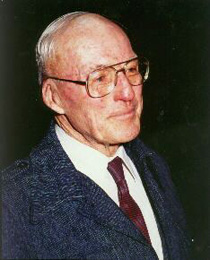 Army Captain Phillip Couzens Leahy headed a project which had international impact. Few people knew of this at the time, because it was part of the government’s secret Manhattan Project which developed the atomic bomb. From March, 1943 to March, 1946 he directed the discovery, refining and procurement of uranium from the Colorado Plateau for atomic research. He became the first manager of the Atomic Energy Commission Compound from 1947 to 1949. (T. McGill Photo, U.S. Department of Energy) 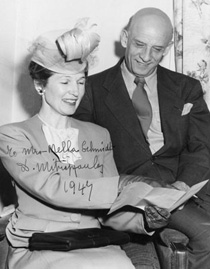 The very successful Columbia Concert Series began in 1944, and still continues at the Mesa County Community Concert Association. Many outstanding musicians, and occasionally theater and dance troops, appear during the annual season. Mrs. Melba Schmidt was a founder, and the president for 15 years. With her is Dimitri Mitropolulos, celebrated conductor of the Minneapolis Symphony who performed here in 1947. 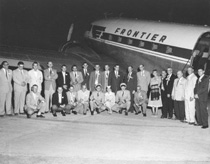 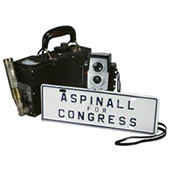 During the 1950s, the turbulence of the Great Depression, World War II and Korean War were succeeded by a nation focused on the pursuits of peacetime. Grand Junction also thrived, and the uranium industry was an added stimulus. Population in 1950 was 14,504, a 16.2 percent growth through the 1940s.