Wholesale firms in Grand Junction supplied businesses in Western Colorado and Eastern Utah. In Colorado, the wholesale businesses in Grand Junction were second only to Denver. The wholesalers flourished, especially in the booming 1950s. Biggs-Kurtz Hardware dealt in all lines of light and heavy hardware. The Independent Lumber Company had 19 lumber yards regionally, and was both wholesale and retail. The C. D. Smith Drug Co. had both drug and chemical divisions. Other wholesalers provided groceries, paper, dairy products and petroleum, to name a few.  (Midwest Photo)

Uranium mining and milling became a large industry on the Colorado Plateau. The Grand Junction Operations Office of the United States Atomic Energy Commission was headquarters for the enterprise, and bought all the uranium produced. Grand Junction also was home base for as many as 35 mining companies, including area offices of major mining corporations.  (The Daily Sentinel, U.S. Department of Energy)

Fruit from the Grand Valley continued its reputation for top quality. The peach orchards produced record crops at good prices. There were 900,000 trees and more than 800 orchards. However, pear and apple orchards continued to be replaced by general farming, and subdivisions continued to encroach on prime agricultural lands. 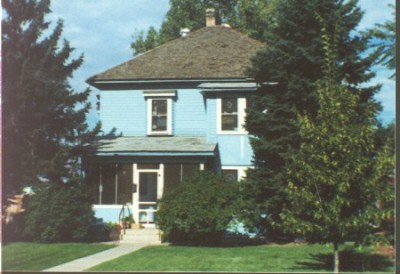 Artist groups had long planned for an arts center. The Western Colorado Center for the Arts dates from 1953 when the Mesa County Arts Center Board was incorporated. They bought a building near 7th and Orchard (pictured), and opened it in 1960. A hexagonal building was added in 1970, and there have been further additions. By the 1990s art instruction and exhibits in the galleries were provided year around, and the auditorium hosted music, drama and dance. (Frank Bering Photo)

The expanding student population of Grand Junction prompted the building of a new high school in 1955 on North 5th Street. It was designed in a clean lined, modern 1950s style by architect Paul Atchison of Denver. The auditorium was made large enough to serve also as a civic auditorium.  (1958 Grand Junction High School Annual) 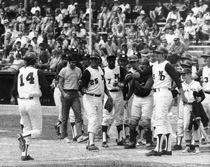 The National Junior College Baseball Tourney, nicknamed JUCO, moved here in 1958. It has wide local support. The top ten junior college teams from across the nation come here to compete to be number one. In the spring, JUCO guarantees a rousing series of games which fill the stadium with avid sports fans. This is at Suplizio Field in Lincoln Park. 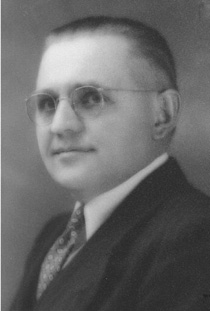 Wayne Aspinall was the U.S. Congressman from this District from 1949 to 1973, becoming chairman of the powerful House Interior and Insular Affairs Committee in 1959. Serving until 1973, he was chairman in this important post longer than any other congressman. Dams, reclamation, mining and forestry are crucial to the West, and he was vigilant in promoting those interests. A masterful legislator, he managed over 1,000 bills in the House, and every one passed. 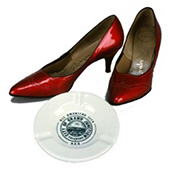 The All America City recognition inspired widespread use of its logo. Even ash trays were adorned with the city’s new honor.

The metallic red shoes with spike heels and pointed toes were dress-up shoes for teacher Gladys Conway. A hat, gloves and purse also were included in a woman’s ensemble. 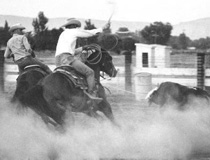 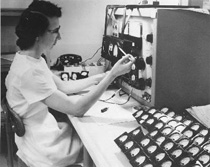 New technological developments in electronics spurred its manufacturing. Electronic manufacturing plants began to open in Grand Junction to take advantage of the available labor force. Dixson, Ultronix, and Hickok were some of the manufacturers. Lower labor and distribution costs elsewhere lead most of them to move away in later decades.  (Bruce Dixson Photo) 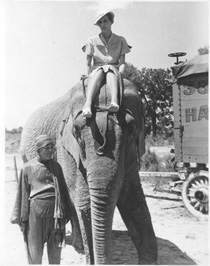 Mildred Hart Shaw (here atop an elephant) was a reporter, an editorial writer, and then book reviewer on the Daily Sentinel from 1936 to 1980. From 1959 to 1970 she also mentored the Junior Great Books reading and discussion groups for high school students. Many were intellectually stimulated by these sessions, and went on to excel at colleges and universities.