Last operating coal mine, Powderhorn/Roadside Mine closes in December.

Palisade Library moves from Municipal Building to an annex of the 1925 Palisade High School building as requested by the Town.

Town of Palisade celebrates its Centennial.

Palisade’s newspaper of record, The Palisade Tribune, is sold to the publishers of The Daily Sentinel in 2012. Two years later, in March 2014, the Tribune ceases to be printed. The community suffers from having no local news source. Palisade Historical Society negotiates for the archival newspapers in the building and then fundraises to get as many issues of the newspaper, beginning with the June 6, 1903 issue, digitized and available for research on the Colorado Historic Newspaper Collection website. Palisade has the only Medical marijuana outlet in Mesa County and voters approve retail marijuana stores in the November 2016 election. In addition to expanding into retail by the Medical Marijuana store, two more retail stores are authorized to sell marijuana by the Town Board.

Wineries continue to be a big attraction, though record peach crops continue to make Palisade a destination for tourists and locals. New crops grown in Palisade include lavender and hops. 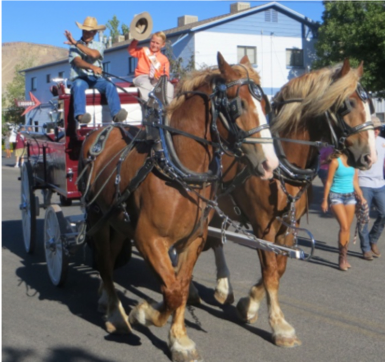 Nick is a 4th grade student at Denver Public School Amos Steck Elementary who founded Colorado for the Palisade Peach in an unsuccessful attempt to designate Palisade Peaches as the state fruit.

Palisade Historical Society incorporates as a non-profit organization in March. 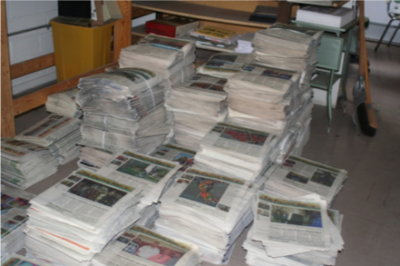 Stacks of newspapers in The Palisade Tribune office are sorted and placed into archival boxes.

The community is devastated when The Palisade Tribune, the newspaper of record since June 6, 1903, ceased publishing March 13, 2014. Palisade Historical Society volunteers sifted through the building’s contents to find and preserve original copies of the newspaper for reference and future digitizing. By August 2017, the Historical Society raised funds to get 1,707 issues digitized–over half the issues ever published from 1903 to 1966–added to the Colorado Historic Newspaper Database for online research.

Palisade Historical Society celebrates 100th birthday of the dedication of the Grand River Diversion Dam on June 27 to call attention to the vital roll irrigation plays to our life in the Grand Valley. A crowd of 500 enjoys speeches, including from Congressman Scott Tipton, Bill Fitzgerald, great grand nephew of Wayne N. Aspinall, and others. Three birthday cakes were cut by Dorothy Carver Hines, who grew up at the Roller Dam, as her father was caretaker for 33 of the Dam’s 100 years. There was also a “Dam art show” with 43 “roller dam” centric entries, documentaries, videos, and information booths. Music throughout the day-long celebration featured Jeanie Thomas, Bookcliff Barbershop Chorus, and Way Down Yonder bluegrass band.