A standard gauge railroad extends from New Castle and opens new markets for Palisade’s coal and fruit business outside the Grand Valley. The Rio Grande Junction Railway was a joint venture between the Colorado Midland and the Denver & Rio Grande Railways which jointly operate the railway from Rifle to Grand Junction. Mary Currie files a patent for 133 acres of land at the center of Palisade in 1891, but probably occupied it earlier. Currie sold lots to Frank M. Burger in October 1891 who then sold them to Grand Junction banker and developer Benton Canon six months later for more than twice the $1,500 he paid for the two lots. Canon filed the original plat for the town between First and Fifth streets, and Main Street and Peach Avenue. In 1889, Currie sold a strip of land for a total of 6.3 acres to the Denver and Rio Grande and the Colorado Midland Railroad for the railway right of way. W.A. Pease is considered the first settler in what was called Palisades.

Canon also plats the Palisade Fruit Tracts which have 12 lots varying from one to 13 acres covering the area from First to Eighth streets and from Peach Avenue west to Elberta Avenue. The area from Fifth to Eight and from Main St. to Peach Ave. are known as Fruit Tracts. 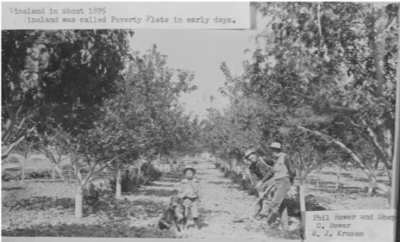 Early orchards were also planted in the Vinelands, then known as “Poverty Flats.” Colonel Christopher Columbus Bower center, with his son, Phil, and dog, Shep. N.J. Krusen is on the far right. Colonel Bower was one of the original incorporators of the town of Palisade and elected as a member of the Board of Trustees. 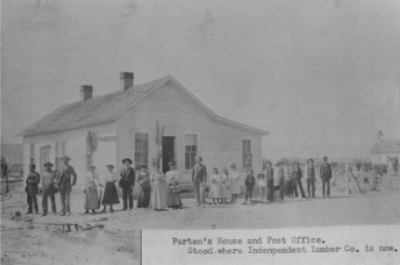 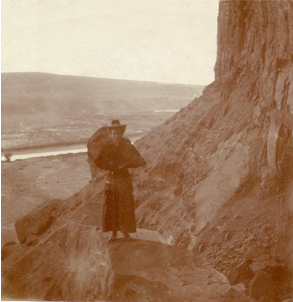 Mae Purdy hikes on the stage coach trail near the palisades in the 1890s. The trail was built to get mining equipment to the Mt. Lincoln coal mines. It was never used by stagecoaches. 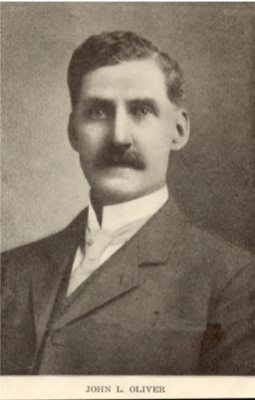 John L. Oliver was one of the first Palisade fruit growers. His orchards,  planted before irrigation ditches were built, require water to be hauled from the river in barrels on horse-driven carts from first sun light until dusk. 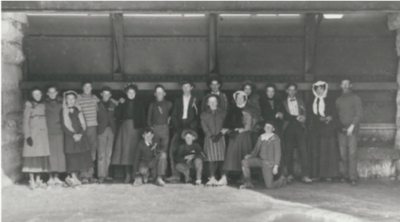 Frozen water in the bottom of the irrigation canals provides options for ice skating. This group is posing at the Grand Valley Canal headgate. 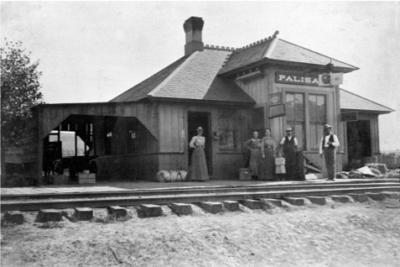 Palisade’s first depot is located on the south side of the tracks near Kluge Avenue. It was then moved to the north side of the tracks and used as a residence.  It became the United Fruit Growers’ Association offices for many years, and is now part of Peach Street Distillery.

Palisades Post Office opens, with W. A. Pease as Postmaster, on April 7. 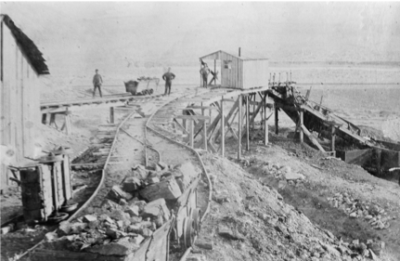 Coal Mining was important to Palisade’s early economy. More than a dozen coal mines operated near Palisade over the years. 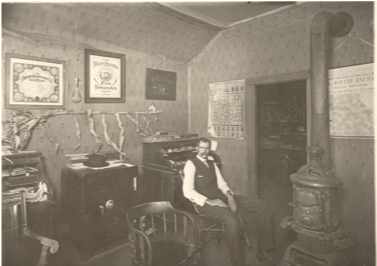 Judge Hoke in his office in what was previously the first one-room school built in 1893. It was the location of the Palisade Public Library until 1952.

Courtesy of the Charlesworth Family