The first Railroad to build into the Grand Valley was the Denver & Rio Grande (D&RG), based in Denver, Colorado.  The D&RG was established by a former Union cavalry general named William Jackson Palmer.  It was unique in that it was built narrow gauge—the rails were only 3 feet apart, unlike the standard gauge of 4 ft, 8 ½ inches, because it was thought that narrow gauge trains could more easily climb the steep mountain grades and negotiate tighter curves.

The Grand Valley was not a specific destination for the D&RG. The railroad was heading to Salt Lake City on its long, difficult and indirect trek through the Rocky Mountains via Pueblo and Gunnison. The Utah portion of the D&RG alignment was controlled by its subsidiary, named the Denver & Rio Grande Western (D&RGW), and the newly founded town of Grand Junction was established as a division point between the two. West of Grand Junction, the D&RGW ran through the desert on a crooked route north of Ruby Canyon.

Being a division point created many jobs in Grand Junction when first train ran into town on November 21, 1882. The new line was completed March of 1883.

The extreme cost of building the D&RG/D&RGW through the Colorado Rockies caused significant problems for the railroad. In 1884 the stockholders revolted, and the ensuing conflict broke the railroad in two, with Palmer in control of the D&RGW and east coast businessmen in charge of the D&RG. The two rival railroads interchanged traffic, but the hostility lasted for years. 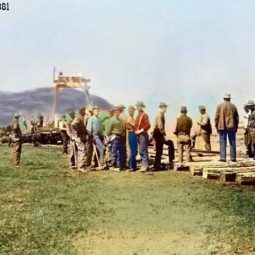 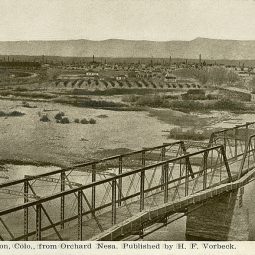 Grand Junction in the late 1880s 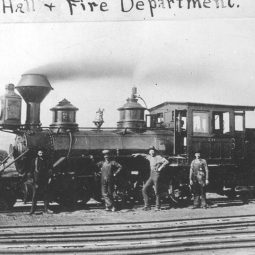 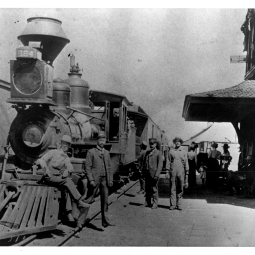 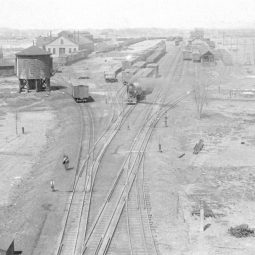 In the 1886, a new standard gauge railroad, the Colorado Midland (CM), began building west out of Colorado Springs. The driving force behind the CM was the businessman, John Hagerman, who had moved to Colorado Springs in hopes for a cure to tuberculosis.  The CM was heading for Salt Lake City via Leadville, Colorado. Because it was standard gauge, the new CM would have been able to easily out compete the narrow gauge D&RG/D&RGW.

With the rapidly approaching CM tracks, both railroads started plans to build to standard gauge. The D&RGW went so far as to reorganize into a completely new company, including a new name – Rio Grande Western (RGW). When the RGW changed to standard gauge it also changed its route to a straighter one and utilized Ruby Canyon southwest of Mack, Colorado.

When the CM started building west from Leadville, the CM and D&RG entered into a race to reach the new mining town of Aspen. With cheap quick building techniques honed during the original building of the railroad and some luck, the D&RG won.  The ensuing race drained both railroads of capital and forced the CM to change its plans.  Instead of building to Salt Lake via Meeker and Duchesne, the CM decided to divert to Grand Junction via a connection with the RGW which also ran to Salt Lake City.

As agriculture grew in the Grand Valley the need for shipping the local produce increased. The D&RG would continually build and rebuild ever more massive icehouses and a large storage yard for all the refrigerated boxcar cars called “reefers” that where needed to transport the produce on the west side of Grand Junction. 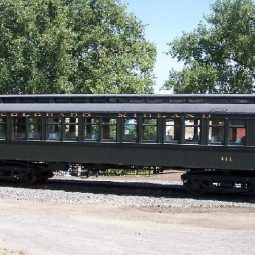 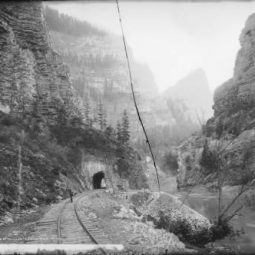 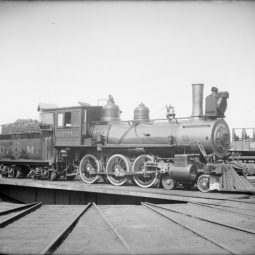 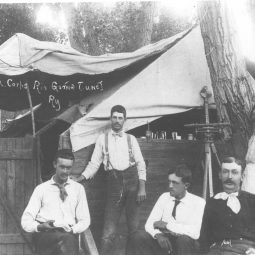 In 1901, the D&RG bought the RGW. The two lines were formally merged in 1908. As a result, the merger led to a decrease in CM traffic out of Grand Junction because its Salt Lake City connection was now in the hands of it the main competitor, the D&RG, which had little reason to share traffic.

World War I and the End of the Rivalry

World War I brought great hardship to the railroads of the United States. They were caught unprepared for the huge increase in traffic and their attempts to coordinate operations all failed. To alleviate the gridlock, the federal government created the US Railroad Administration (USRA).  When the USRA reviewed the traffic and routing in Colorado, they favored CM’s straighter but steeper route through the Rockies because it appeared that it would better handle the war traffic. Unfortunately, the ever cash-poor CM could not handle the traffic surge and trains soon ground to a halt, causing the USRA to abruptly reroute all traffic off the CM and onto the D&RG. Without overhead traffic the CM quickly ran out of money and closed.  It was scrapped in 1922.

Meanwhile, this era was not easy on the D&RG either.  While the WWI traffic did not overload the railroad like it did to the CM, the strain was huge. After several years of falling behind in its debts the D&RG filed for bankruptcy in 1921.  The railroad was reorganized and renamed the Denver & Rio Grande Western (D&RGW). With the CM gone the D&RGW became the only railroad in Grand Junction and held a monopoly on rail traffic. 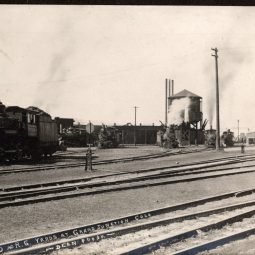 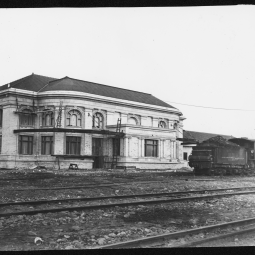 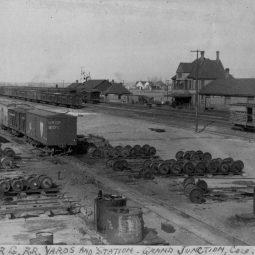 The Denver & Salt Lake (D&SL) was established in 1904 by David H Moffat, a wealthy Denver mine owner, who wanted Denver to have its own rail line west into the mountains. At great personal cost, Moffat had the line built all the way to Steamboat Springs.  A long tunnel had been planned under the continental divide just southeast of Fraiser, but with dwindling money, Moffat chose to build over the top of the mountains west of Boulder. The pass was called Rollins Pass, and it was the highest, (11.660ft elevation), toughest, rail crossing of the continental divide in the country.  Railroad employees nicknamed the pass “Hell Hill”.

By the time of Moffat’s death in 1911 the D&SL only had the funds to build as far as Craig, Colorado.  An investor from England was found to save the railroad in 1915; however, he bought a return ticket on the Lusitania and did not survive its sinking. Things looked grim for the D&SL until flash floods destroyed Pueblo, Colorado in 1921. After the devastation, the State allocated money to build massive infrastructure upgrades all over Colorado. One of the chosen projects was a new rail line tunnel under James Peak for the D&SL at what would become Winter Park. Also included in the project, was a water diversion tunnel, completed in 1928, that still carries water to Denver to this day.

In 1934 the D&RGW completed the Dotsero Cutoff, just east of Glenwood Canyon. This new rail line connected the D&RGW with the D&SL. Seeing the great value of the new tunnel, the D&RGW started buying stock in the D&SL  The ultimate goal of the D&RGW was to build the new cutoff connection allowing for D&RGW trains to run over the tracks of the D&SL. With the Great Depression in full swing, the D&RGW had little money for this endeavor; however, it spent money it did not have to complete the route.  With this new route, the D&RGW had a shorter, cheaper connection between Denver and Salt Lake City.  The D&RGW would later purchase and merge with the D&SL.

In 1935 the D&RGW filed for bankruptcy.  During the proceedings, the courts appointed Judge Wilson McCarthy to oversee the D&RGW’s reorganization.  Realizing the great potential of the railroad, McCarthy set about rebuilding the line into a strong operation. Through his efforts, the D&RGW became a modern, efficient line that later effectively handled the huge traffic of World War II.

In January 1941, the D&RGW began to purchase a new form of motive power to pull trains. The newly designed locomotives were called “diesel electrics,” or “diesels” for short.  These new locomotives had lower maintenance costs and were cleaner than the old steam locomotives railroads had been using for over a century.  The diesel locomotive rapidly transformed the railroad industry.

In 1953, the D&RGW constructed a massive 4-mile-long classification yard on the eastern edge of its old Grand Junction railyard. At this time, the D&RGW was in competition with other western railroads for very profitable intercity traffic. The new yard increased the speed at which the D&RGW sorted its shipper’s cars and delivered them to Denver and Pueblo. The new yard was called a ‘hump yard’ because it had a hill built into it with tracks arranged below for sorting the cars by gravity. 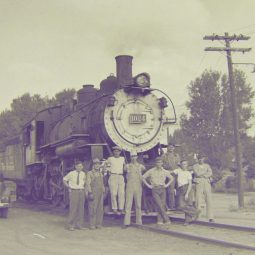 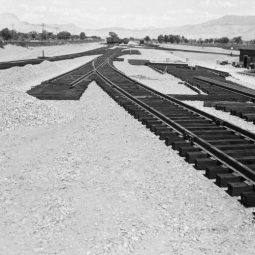 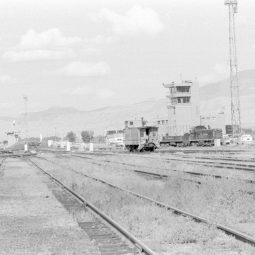 Working in the yard in the late 1960s 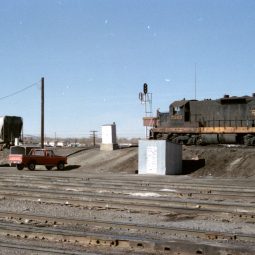 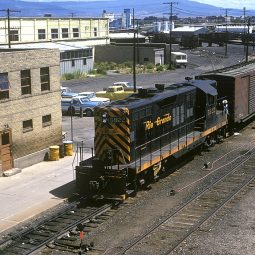 In the 1960s, shifting sources of fruit production, especially from California, caused a significant reduction in the agricultural traffic on the D&RGW. In addition, mechanical refrigeration became commonplace, and the massive icehouses in Grand Junction were no longer needed and thus demolished.

During the 1970s, coal power plants in eastern cities started using low sulfur coal from the West to meet clean air requirements.  This caused a large, extended surge in coal traffic on the D&RGW.  Coal mines in the Paonia, Craig and Helper regions saw the largest increases in traffic.

Amtrak was formed in 1971 to take over passenger rail operations from the freight railroads.  However, D&RGW chose not to join Amtrak and instead decided to continue providing passenger rail services. For 12 years the Rio Grande Zephyr passenger train ran from Denver to Salt Lake City.  In July of 1983, Amtrak finally took over passenger train operations from the D&RGW. Amtrak was eager to run their new California Zephyr thru the Colorado Rockies, before that time, they had been running trains thru Wyoming.

On Oct 1, 1984, the D&RGW was sold to Phillip Anschutz, a Denver billionaire.  A few years later, on Oct 13, 1988, Anschutz purchased the much larger Southern Pacific (SP) and merged the two companies, using the better-known SP name. The SP was in poor financial condition and proved hard to operate at a profit.  After the merger of Burlington Northern & Santa Fe  (BNSF) railroads in 1995, Anschutz decided to sell out. On Sept 11, 1996 Anschutz sold the SP to the Union Pacific.

Shortly afterwards the Union Pacific (UP) transferred all through traffic to its Wyoming mainline, leaving only the locally based coal traffic.  In recent years the changes in power generation have caused a sharp decline in the use of coal. This has reduced the number of coal trains running through the Western Slope.

As a condition on the SP-UP merger, the BNSF railway based in Fort Worth, TX was granted trackage rights from Denver to Salt Lake City and haulage rights to California. The BNSF has since become the busiest operator on the Western Slope running more trains than the UP and Amtrak combined. Many of their trains are mix manifest trains and they also run Unit Oil trains out of Price, Utah a new addition to the train traffic of the Western Slope. 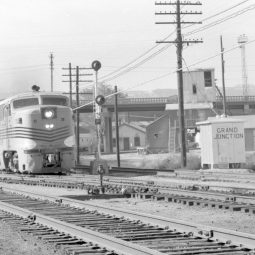 California Zephyr in the early 1950s 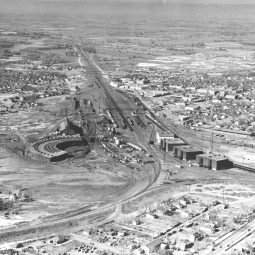 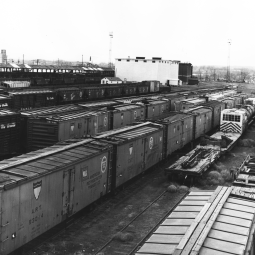 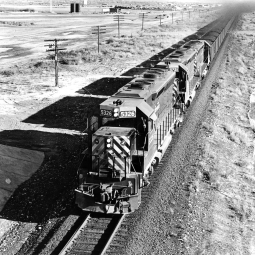 A coal train heads west out of Grand Junction in 1968 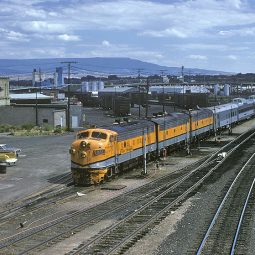 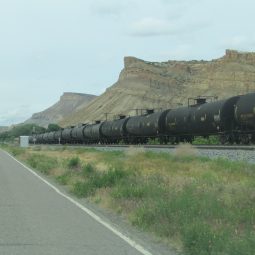 Oil Tankers in the Grand Valley